I’ve never really been a 100%-er, sure I’ve gathered that fabled status on a handful of games, but I’ve reached a comfortable state where I can put a game down without feeling the need to slay forty-dragons with a teaspoon, only walking backwards, following a heavy drinking session with the local wizard if it’s not fun anymore… although that particular brand of cutlery fueled reptilian carnage sounds pretty excellent so I would probably give it a shot. That being said, I do tend to reach the ‘end’ of a game if I’m enjoying it; whether it’s closing out the story, clearing all the missions, or managing a complete run, watching those credits roll is just as satisfying now as the first time I achieved it years ago.

It’s strange then that there are a few games that I think are pretty great that I have never gotten around to finishing. So, in a confession of sorts, here are five games that I’ve never completed… And my half mumbled apologetic excuses as to ‘why’:

Not being known for being a handheld gamer, nor for having an overwhelming history with Nintendo, it might be surprise that I bought the 3DS at launch. I was, and still am, pretty taken with the idea of glasses-less 3D (which might be a post for another day) despite it falling out of favour in recent releases for the system. I was also drawn in by the promise of finally being able to enjoy the extensive backcatalogue of DS titles, of which the Professor Layton series held a mystical draw. The Layton series brings together bitesize brain teasing puzzles, intriguing story, and a distinctive visual style of art & animation. It became one of the standout series for the DS making excellent use of the two screens & stylus interface whilst providing an experience that could be digested in small chunks, or extended play sessions… Although if you don’t like sliding block puzzles, they might not be the games for you… Miracle Mask represents the fifth title in the series, and the first to be released on 3DS.

… And your excuse for not helping the Professor and his well named sidekick through their maiden 3D adventure? Game fatigue; I’d just gone through the first four Leyton games with a healthy rate of completion when Miracle Mask was gifted to the world. Charming as they are, I could only take so much of the anticipation that builds every time you submit your puzzle solution so I decided to put them game down for a while, which coincided with my gradual move away from the platform all together.

Swery65’s cocktail of Twin Peaks & Silent Hill was always going to appeal to me. I’ve got a weakness for the mysterious happenings in small town USA and lapped up games like the aforementioned Silent Hill and Alan Wake. It’s a game with a justified cult following that takes its gameplay and visual inspiration from 90’s survival horror. There are enough open world elements to make exploration interesting without being overwhelming including time specific events, and (if you’re into that kind of thing) a tantalising sprinkle of collectibles. The enigmatic Morgan Francis York is the game’s protagonist, and provides some excellent quotes and trivia in his conversations with Zach whilst driving. Zach is just one of the many bizarre elements; an imaginary conversational buddy to York who essentially represents the player in these exchanges. It’s a game that’s creepy, fun, and funny all in one and, despite the extensive production difficulties, put Swery on the map as an outlandish and unique have developer.

… What was your excuse for not helping FBI agent York solve this mystery? Technical problems; I played the game on PC and there is one section where the player must go down a ladder, but every time I tried this, the game crashed until I finally turned away from it, never to return.

‘Devil May Cry’ was a standout title on the PS2. Dante’s supernatural and gothic romp set a high bar in standard for the third person hack’n’slash and arguably inspired later titles such as ‘God of War’, ‘Bayonetta’, and… Erm… The DMC reboot? It could even be claimed that games such as the Arkham Batman series took some of this inspiration for free flowing mob combat from Dante’s furious sword wafting. Skipping quickly over the lackluster Diesel advert that was ‘Devil May Cry 2’, the third outing brought Dante back with more style, outrageous action, and ludicrous swords than ever. It’s generally held up as the finest offering of the series and an example of how to give the fans more of what they want, including being able to surf on enemies…

So why then didn’t you think it fitting to see this raucous fusion of sword and gunplay through to its conclusion? Difficulty; it is rare when a game’s raw challenge defeats me (I’m not claiming to be good, just persistent) but this is exactly what happened with DMC3. I reached a boss, that I’m going to describe as vampiric sorceress, that I couldn’t defeat, it was brutally hard and punishing of any error. Finally I got bored of reloading and gave up.

Alien: Isolation showed the gaming world how pacing and tension could substitute for gratuitous gun battles and made hiding under tables or looking at the inside of locker doors intense gaming moments. Taking its queues from Ridley Scott’s original sci-fi outing, Alien: Isolation managed not only to recapture the visual style of the 1979 classic, but to transport the player in to that universe with a healthy attention to detail. The game takes place aboard a troubled space station which features rogue androids and roaming gangs, but taking centre stage is the Alien; yes, that’s right, just one Alien. I couldn’t help a sharp intake of breath when it first gracefully rolled out of a ventilation shaft, and from that moment those bumps and rumbles from the ductwork sent me charging into the nearest locker. I’ve never proceeded so slowly through a first person game.

So why didn’t you think Ripley Jr. deserved to escape this nightmare? Distraction; I don’t remember why, and I don’t remember what, but something happened that made me put the game down. Maybe it was something we began playing on our weekly online sessions that took up gaming time. Whatever it was, by the time I returned to Alien:  Isolation, I had completely forgotten how to play it with any type of competence and ended up subjecting our protagonist to the Alien’s hunger again, and again, and again… 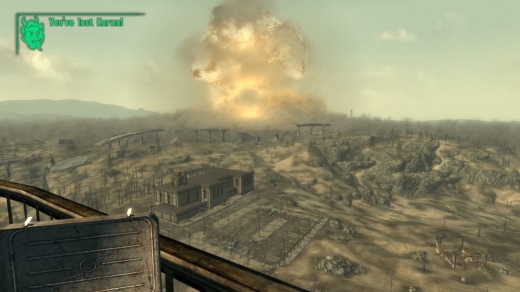 U.S. presidential history has always been something I’ve found interesting… oh, and Cold War politics of the 50’s and 60’s… oh, and I once took a detour to Washington DC just because I wanted to walk around the non-wasteland versions of the locations in Fallout 3. So when I say that the third installment of the franchise is my favorite, it’s pretty accurate.  Combining significant RPG elements into an FPS adventure was a bold move for the series, but the formula is one that the series has stuck with for the subsequent two sequels. The game contains an impressive open world to explore, wide variety of interesting quests, characters, and events to enjoy alongside the distinctive 50’s theming that’s present in every location. At its core the game has a strong concept and sound gameplay (although combat can be a little ‘clunky’) making it arguably only second to Skyrim in Bethesda’s open world lineup.

So why did you manage to get to the finish line in New Vegas and Fallout 4 (which wasn’t great), but not in the D.C. Wasteland? Poor Planning; I ended up making it to the end sequence of the game and then realising that I couldn’t go back and explore more; sadly I hadn’t ‘leapfrog’ saved so couldn’t backtrack to before the start of the mission. I wasn’t ready for it to finish, it was too good! … sooooo.. I decided to start again… but this time I wandered .. and wandered…. and never made it to the end….

So how about you? What game did you really enjoy but never finish?

16 thoughts on “Confession: “I Didn’t Finish These Five Excellent Games””