So ‘Sonic Mania’ is arriving soon and, although that may not excite many people, any of us who fought bravely in the 16-bit wars of the early 90’s on the side of the blue spiked hero will be eagerly awaiting his return to his 2D homeland where he is still loved, in all the same settings that we loved him in. It promises to be unashamedly aimed at fans with tunnel-super-nostalgia-vision set to max being a remix of the classic levels with some new mechanics but the same frantic flowing platforming that wow-ed us all those years ago. If you were of ‘the way of the plumber’ then I’m sorry, you ‘understandably’ just won’t understand.

Sonic’s upcoming romp sparked up an age old question in my mind blurred by the various tellings of the how & why of Sega’s mascot through poorly translated manuals, official tie-ins sending out mixed messages, and of course playground rumours; namely how fast is Sonic? Some put him faster than the speed of sound, so in excess of 767 mph (at sea level in standard conditions) whilst Sonic Unleashed clocks him over 2500 mph and apparently there are power-ups in some of the 3D games (shudders) that make him even faster. Given that Mania will be taking him back to his roots, I decided to base my assessment of his velocity from those beginnings, his first outing on the Sega Mega Drive (Genesis).

For this discussion I’m trying to work out how fast Sonic can run; no powerups, no rolling, flat ground, typical hedgehog sprinting conditions, all based on that first game. To do that it’s necessary to measure distance, and what better way to measure distance than by using sonic’s own height as our yard-stick, or in this case metre ruler. Most sources list his height as 1 m (yup, exactly a metre) tall which is handy as an ingame measurement, and thinking about how tall he is compared to the other woodland creatures, Dr. Robotnik (yes, I’m oldschool), and even (Shudders even more) the other humans he comes into ‘contact‘ with, 1 m seems about right. Also handy is the clock at the top of the screen which gave me something to time him by. I looked at two frames a second apart, measured by how much a specific ‘marker’ (ok, it was one of those weird sunflowers in Green Hill Zone) had moved whilst Sonic was cruising at top speed and calculated how epically fast he was moving… are you ready? …

That was it!?!? Less than the speed limit around a primary school zone? Something had to be wrong, so I decided to tackle the problem with a different viewpoint. Obviously the game designers had falsely portrayed Sonic’s speed in order that us mere humans could keep up with him… that must be it… right?… 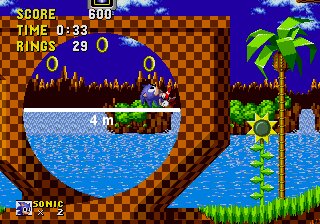 My new approach was to judge Sonic’s speed based on what he could actually do; and in the first game his speed is demonstrated best by being able to run around Green Hill zone’s famous loop-the-loops, so just how fast did he need to be going to achieve this? Once again scale is critical, by measuring a still image I found that the loops are almost exactly 4 m in diameter (radius, r = 2 m). In order to run around a loop, Sonic needs to stay in contact with the surface of the loop and the most extreme test of this occurs at the exact moment when he is upside down. At this point his weight ( mass x acceleration due to gravity (9.81 m/s2)) must be at least equal to the centrifugal force he experiences … (if you don’t care about centrifugal vs. centripetal forces then skip the next bit in italics)…

… and in this case I will be speaking about centrifugal force. For those of you about to pipe up and say that there is no such thing, and that centripetal force is the force acting toward the centre of the circle you’d be quite right, but centrifugal force is the apparent force that the body being rotated ‘feels’ forcing them away from the centre of the circle due to their own inertia as they move around it. Considering things from Sonic’s point of view is simpler in this case as most people can imagine gravity pulling Sonic directly down, and centrifugal force throwing him directly up when he is completely inverted. If you’re still reading this bit, but confused about the difference between the two and how a force can just be ‘apparent’ (also termed fictitious) just imagine you’re in a lift which suddenly accelerates upward; it ‘feels’ to you as though you are getting heavier, like there is a force pushing you downwards, but in reality it is the force of the lift accelerating you upwards that makes you experience this…

… pressing on… Newton was a clever chap and stated that:

If we pop in the numbers we know about the loop and the acceleration we’re aiming for it gives us Sonic’s minimum speed whilst upside down in the loop… ready?…

Gah! this is even slower than clocking him on the level! I would have assumed he’d need to be really booking to make it safely upside down. Hang on though, he’d need to go in to the loop much faster in order to still be at 10 mph by the time he hit the half-way point, maybe there’s still hope for him being the “fastest thing alive” (Note: Turn up the volume and click on that link). 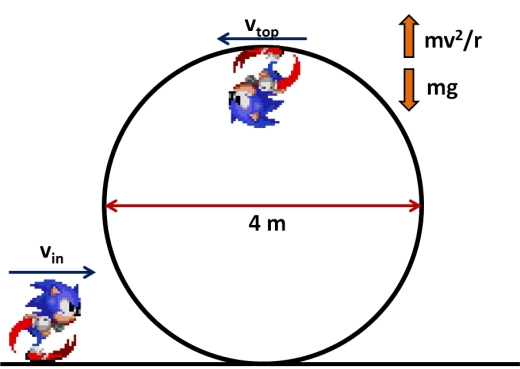 To work out how fast he needs to be going when he hits the loop we need to assume that Sonic is hedgehog enough to overcome any resistive forces that are acting on him… you know like wind resistance, the resistance of his own limbs, even losses because of any heat he might be producing, and, for the sake of this discussion, that he’s not adding any more energy than that whilst he is in the loop (this is the ‘best’ case and will give him the highest entry speed… it’s also the easiest to think about). Energy is conserved (it can be neither created, nor destroyed) therefore the following is true where KEin is Sonic’s kinetic energy going into the loop, KEtop is his kinetic energy at the top of the loop, and PEtop is his potential energy at the top of the loop:

These values can be found using the following equations:

With a bit of shuffling the final expression for the speed going into the loop needed for sonic to just get around it without losing contact with the floor is:

Are you ready for? The speed Sonic needs to be propelling his super attitude riddled blue spikey form into a loop in order to make it around?…

*Facepalm* it’s moved in the right direction, but a speed well under what you can drive in residential areas is hardly worthy of the reputation he’s made for himself, there are still humans that could outrun him (over a short distance at least) going this fast.

Ok, the one last chance for our little blue hero is that this still isn’t quite right. If sonic only just made it around the loop he would essentially ‘slip’ at the top if he tried to push himself forward and us veteran players know that he can still accelerate when upside down so there must always be some force pushing him into the surface he is running over. The frictional force the sole of a shoe can provide is proportional to the force acting through it in a perpendicular direction; unfortunately I don’t have access to the coefficients of friction of Sonic’s shoes over the Green Hill terrain, so I’ll have to improvise. I’ll assume that when inverted Sonic must be experiencing a resultant force away from the centre of the loop which is the same as his weight normally (ie. when he’s upside down in the loop it feels like he’s running normally). In this case the centripetal acceleration must be twice that of gravity at the top of the loop (19.62 m/s2). I’m guessing in ‘reality’ this is more than Sonic could take – we know he’s fast, but he’s not legendarily strong. In this scenario as he went into and came out of the loop he would experience seven times is own weight downwards and I’m guessing would cause him to crumple at the knees. Feel free to go back and put the numbers into the equations above, but I’ve done it… twice… and I have now the definitive assessment of Sonic’s fabled speed….

Fine… I give up… He may be an icon of the 90’s, and Sega’s mascot, but he’s also a liar because he can run nowhere near as fast as he claims…

A 4m loop just isn’t that big; it’s about the size that Tony Hawk built to skateboard around and as the speed needed to get around increases with loop size it is unsurprising that sonic doesn’t need to be going that fast. Some of the later Sonic games (the 3D ones) show the loops as much larger which would need him to be travelling significantly faster, but just not those early ones. The G-force on entry and exit also poses a problem and is why loops in roller coasters are rarely circular, they tend to tighten at the top, but the run in and run out have a much gentler curvature to make it bearable for the riders.

Have I missed something? do you think there is a better way to truly know how fast our blue spiked friend is going? … or did you always know that he was a fraud! Let me know in the comments!

Final Note: This article was written for ‘entertainment’ purposes and although the equations and reasoning are (to my knowledge) sound, there are a some assumptions that I made but didn’t talk about and one in particular that would change the result. I assumed that Sonic’s centre of mass would be acting at the surface of the loop which just isn’t true, it would act roughly half way up his body… actually higher given how enormous Sonic’s head is. This would meant that the effective loop he was travelling around would be even smaller and the speeds even lower! I wrote it like this to keep the numbers nice and make the spined-one as fast as I could reasonably argue.

27 thoughts on “How Fast is Sonic: My Own Take on the Age Old Question”

© Luke Carter and Hundstrasse.com, 2015-2023. Unauthorized use and/or duplication of this material without express and written permission from this site’s author and/or owner is strictly prohibited. Excerpts and links may be used, provided that full and clear credit is given to Luke Carter and Hundstrasse.com with appropriate and specific direction to the original content.