Spoiler Warning: In this post I discuss the plot, including the ending, of Zelda: Breath of the Wild…the clue is in the title…

As my first real outing into the Kingdom of Hyrule, I’ve thoroughly enjoyed BotW and feel at least slightly more qualified now to engage in a Zelda themed conversation than I did just a few short months ago. It’s a game that excels at providing challenge and the thrill of adventure, however you want to tackle it, all wrapped up in a well crafted and intricate world. One of the reasons I havn’t undertaken a review style piece (other than shying away from that type of article in general) has been that it would likely deteriorate into a meaningless stream of me using all my favourite words, like “intricate” and “crafted”, without adding much to the volume of work that’s already out there discussing what a solid experience it pulls together to be.

I think the biggest compliment I can pay it is to say that it is exactly what you would expect an open world Zelda game to be, exploration, excitement, fantasy setting, and a fair helping of quirkiness in the mix. It’s a game that excels at providing the player with freedom. I’d be the first to admit there there are aspects to the gameplay that I don’t particularly enjoy, but the game allows the player to approach it however they want; jump in with a claymore and tackle enemies head on, drop in with some aerial archery and stealth attack, or simply sneak past conflict altogether. Link is free (apart from a short tutorial-type section) to explore as he wishes right from the outset to the extent that’s it’s pretty easy to stray into territory that’s beyond the player’s current skill level… Some far more skilled players than me might even attempt heading directly to the final confrontation, sure it might not be a sensible idea, but it’s nonetheless an option.

The one aspect that seems to have drawn some criticism, albeit from limited shady corners of the internet, is unsurprisingly the one aspect where some of that freedom has been wound back; the plot. Unlike many recent brands of open world experience, BotW doesn’t come with the option to construct a player and independently determine their destiny; there are no morality stats, no factions to join, and no slider-rich customisation screen to determine Link’s height, build, and eye colour. The player takes the reigns of Link with the task of defeating Calamity Ganon and saving the princess Zelda, but it seems that this tried and tested formula has been criticised for being light on substance. Part of me agrees that taken at face value, aside from being cleanly executed, it is a straightforward premise, but maybe that’s part of the appeal; I would however argue that by taking it purely as a game about Link fighting evil and winning the day is an over simplification.

…once again…. it gets pretty spoilery after this point…

The ending seems to be one of the bigger sources of conflict; the triumphant player is presented with a brief post-battle cut-scene equating to little more than the Hylian equivalent of riding off into the sunset. As an ending it is undeniably short, but this is assuming that this short moment is the ‘ending’. The game as a whole deals with the events that all occur after hundreds of years of evil growing, heroes coming together, ancient technology being discovered, an epic battle, the inevitable setback, lowpoint, and discovery of elusive power by Princess Zelda. The events that the player partakes in during the game equates to the hero’s return and victory; in short the entire game is ‘the ending’. The preceding story is told through Link’s memories and the interactions with the characters that he encounters but his current state is characterised by a sense of urgency (disregarding side quests to collect chickens etc.) to rebuild his power and finish what was begun so long ago. In this context, criticism about what happens after Ganon’s fall is essentially a complaint aimed at the “end of the ending” and equates to little more than saying “I didn’t like that the plot had to finish“. Still don’t see it? Think of how many well-trod stories feature a figurative or literal resurrection of the hero right before the finale, this is the exact moment that BotW chooses to feature as its opening.

Keeping in mind this idea that the entire game is the culmination of events, it’s commendable that the designers maintained the sense of freedom whilst still managing to convey the key points of the story up to that point. The ‘memory’ quest, in which Link must travel to specific locations in order to unlock forgotten moments from his past is one of the key vehicles through which the plot is delivered to the player alongside the cutscenes that accompany the confrontation with each of the divine beasts. It could be argued however that players expecting traditional narrative might be thrown by the nonlinear nature of BotW given that there was no way for the creators to know which memories the player would encounter first. I found myself rewatching the memories in order as I filled in the gaps to get the full picture. It’s also fair to say that in total these memories don’t amount to very much in length, but I’d argue that the player is given these memories as the framework from which to hang their experiences of the game. For example: journeying through the abandoned battlefields conveys the scale of the confrontation that must have occurred with the guardians; finding the ruins of settlements hints at the destruction caused; speaking to the population illustrates the fractured lives that the people now inhabit; and walking the same journeys that Zelda & the Champions took highlights the lengths they went to in their effort to defeat Calamity Ganon. I guess this type of story-archaeology isn’t going to be to every player’s taste, but I enjoyed this aspect of the game, especially when compared to the linear story-missions of other open-world titles.

My final statement on the BotW plot might be pretty obvious, but it’s well worth saying: It’s not Link’s story. BotW tells a whole heap of small stories, some big & epic, some short & sweet, and whilst Link is the player’s vehicle with his own ‘good-triumphs-over-evil’ tale to tell, you can’t ignore the other stories all woven together in this world. Zelda herself is tormented by her own perceived failings and finds her power through adversity; Daruk fights for the lives of his people and makes amends for the responsibility he feels after their initial defeat; Revali learns humility and respect for the talents of others; Urbosa fights for revenge; and finally Mipha’s tale is one of loss and (possibly) unrequited love for Link against the traditions of her species. It’s not just the Champions that have their own sub-plots, what about Hudson’s search for a better life as he builds his own town, or The King’s guilt over denying Zelda her own interests. Then there are the many other stories that the player only ever has fleeting contact with like uniting the couple at lover’s lake or why the honeymooning pair at Rito village are so interested in baked apples. None of them are overly complicated, but they come together to make an interwoven and captivating experience which compliments the playstyle. 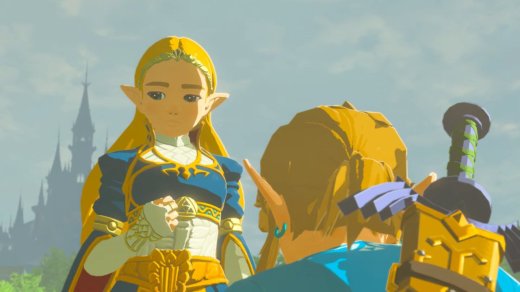 What I’m working up to saying is that it’s a conventional plot told in an unconventional way, and I think the game is richer for it. I can’t say that I have the experience of the series as a whole to know if this works better, worse… or just different… to the other games, but I can say that I’d happily mark the storytelling in BotW in the positives column rather than the negatives.

Thoughts?.. Feelings?… or did you just skip to the end because of the spoiler warnings? Feel free to share all in the comments!

14 thoughts on “Zelda – Breath of the Wild: In Defence of the Story”