Wolfire Games have already featured once in my ramblings; their other major release ‘Receiver‘ showed me that forcing the player to work hard to achieve something as simple as reloading a gun makes for an interesting shift in focus on the tired FPS format. At the time of penning that article I also mentioned ‘Overgrowth’ as having immensely satisfying 3rd person combat that I wanted to revisit once it had managed to accrue enough momentum to break out of a seemingly infinite early access gravity well.

I’m not saying that the good folks over at Wolfire read the piece, but it seems coincidental that just a few short weeks later ‘Overgrowth’ finally made it out of Early Access for an official release. Maybe I have some kind of mystical industry influence, in which case I’ll be accepting donations to mention conspicuously unfinished/perpetually developed games here in a hope that it forces them out into the world… any takers?…

The last time I burrowed in to the world of ‘Overgrowth’ was several years ago. At that time the ingame engine seemed largely functional, but gameplay was limited to short “Kill Everyone” or “Parkour” style levels designed by both the game developers and the highly-active community. Hopping back in now I found that the engine is a little more polished and the single player campaign is a jumbled heap of these levels rammed together with a slender thread of plot holding them precariously together. The story does somehow tie-in with a wider narrative laid out in graphic novels (so I understand) however in the context of the game it is a precarious “kaputte Kaffeemaschine” (as our German speaking friends might say) attempting to add an element of coherency through otherwise disjointed encounters. The plot weakness seems to strem from the ambitious, but small, development team focusing on gameplay over character development. Fortunately this tale of … vengeance?… can be mostly ignored allowing the player to treat each level as an isolated challenge. 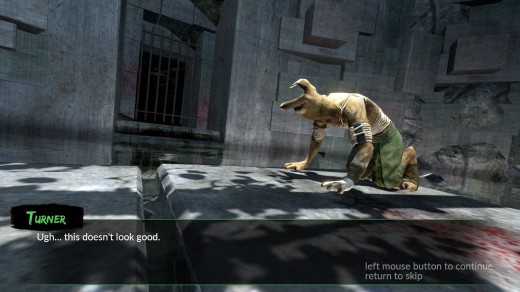 Given that I havn’t exactly lavished Overgrowth in praise so far, you could be forgiven for assuming that I didn’t enjoy going back to it, and I’d be lying if I said it’s an easy title to just pick up and fall in love with, however there are aspects to the game that make it unique; namely the approach taken to both movement and combat, which together make up the core experience of the game. Overgrowth sticks some long ears and a fluffy tail on the player and hurls them into the roll of a warrior rabbit, Turner, driven to fight other anthropomorphised rabbits, dogs, cats, wolves, even rats, and our hero takes to the task with gusto displaying some rapid and nimble acts of agility in his field of combat… assuming it goes well. Typically however the player will end up falling and wincing at the bone crunching sound of a lagomorphic neck snapping, the wet, dull impact of an enemy sword, or a sturdy thump as a spear finds its mark. It’s a game that takes the same approach to combat as ‘Super Meat Boy’ does to platforming; short levels with the player trying to find that one run where it all just comes together.

The general shape of the experience is that of a typical 3rd person game, but one where it feels as though the training wheels have been taken off. Run, and you’re treated to our hero sprinting at a blistering pace around the level; jump, and they launch themselves soaring through the air, covering immense distances if the button is held.

…One of the more satisfying things to do is to hit the crouch button mid jump to see that warrior bunny smoothly perform a somersault in the direction of movement, just make sure his feet are facing the ground when he lands… 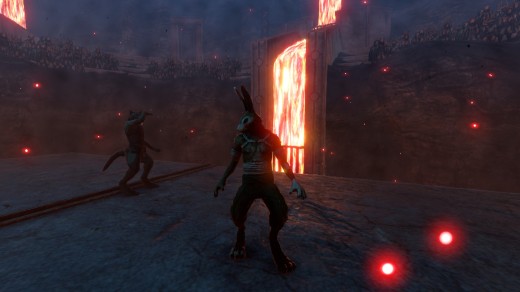 The catch is that, unlike many 3rd person games, there are no safety barriers; land at an awkward angle and he’ll crumple like a bag of limbs, picking himself up if you’re lucky, but more often just lying there until you respawn. Combat is a similar experience; the player can punch, kick, and counter with a throw (or disarm), but there arn’t the exaggerated enemy wind-up animations telegraphing incoming attacks or button cues to guide the process. It’s a game of scruffy brawls where victory and defeat are decided quickly. Much of the game is spent trying to arrange enemies in order to take them on one at a time, or escaping from a barrage of paws and claws. The addition of weapons bring death on more rapidly; they can be thrown or wielded, but either way it’ll typically end in all parties covering a bloody slashes. My favorite combat move is the powerful double foot kick from a jump which can be used with a carefully judged soaring jump to often destroy an enemy in one hit, or, with a small hop, the player can simultaneously drive their opponent backwards whilst using them as a springboard to make distance from the fray.

To compliment the combat levels are free-running levels which challenge our fuzzy-fighter to test out their climbing skills and scale some rocky peak. As with combat, the freerunning can be very fluid, but that level of freedom comes at a price of being far less guided than Assassin’s Creed or Mirror’s Edge. It’s simple to clip a rocky edge during a wall run and plummet to the ground, or mis-time a wall jump to sail past your target platform; but it all makes the success that much sweeter.

With the interest found in the gameplay, and the plot lacking, how does the remainder of the experience stack up? ‘Mixed Bag’ would describe it best. The overall visuals are pretty slick, there is an attractive array of environments… I like the rain effects*… Our rabbit protagonist’s movements are smooth and fit well with the fast-paced movement in-game. Unfortunately some of the other species don’t fare so well; the dogs in particular look weird with their comically small heads (I don’t think the developers like dogs) and many of the NPC’s seem to be pulling odd facial expressions. The combat sounds are solid and satisfying, but the music is fairly forgettable and (it could just be my imagination) seems to loop slightly too often. The whole interface, with its drop down menus to tweak every aspect of the gameplay and easily import community content, is functional but lacking the polish of a finished game. 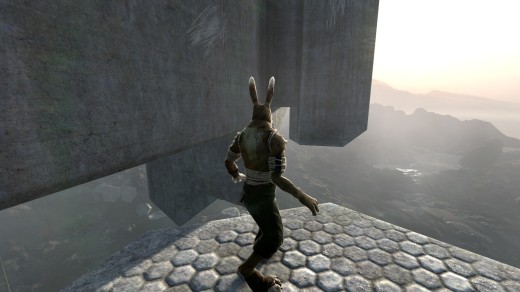 It’s a game that I’ve spent a good few enjoyable hours exploring, but couldn’t actually recommend it to anyone. I remember playing it in early access thinking how overpriced it was for something in such early stages of development and my revisiting, now that it’s officially released, has left me with a sense of disappointment that it hasn’t come on much further from that point. Overgrowth is a game that relies on its loyal community to create content with an inbuilt level editor and maybe the point of it was always to be a sandbox for creators to get to work with, but for me that just wasn’t quite enough given the potential it showed.

2 thoughts on “Overgrowth: It Has Big Rabbits…. Big Violent Rabbits…”