Bully is a game that deserves a gentle preamble for anyone not familiar with it, or the controversy that surrounded Rockstar games in the early 2000’s. Two years prior to Bully’s release, Rockstar bestowed upon the world GTA: San Andreas, another link in their lucrative GTA series served with lashings of violence, murder, and crime. Strangely however it wasn’t any of these nuanced facets that attracted the public’s attention, it was the “unintended” inclusion of an erotically charged polygon-ey mini-game in which the player could QTE their way through some awkward sexy-times. Rockstar had removed the mini-game prior to release but the modding community being what it was quickly found out that the code remained on the disc and just needed to be reactivated. Various moral advocacy groups erupted in outrage, politicians had a fresh pinata to beat with their anti-gaming stick, and Rockstar were forced to make some costly gestures to try and fix the damage. The whole thing smooshed together to become what we now know as the Hot Coffee Controversy.

Having never played any GTA games aside from the original top-down PC release, I can’t comment on how detrimental to the moral fibre of the world this digital intimacy was, although I doubt it did more damage than the player’s illicit activities in the rest of the game.

Two years later in 2006, Rockstar released “Bully”; a game with a similar sandbox structure to the GTA games set in the fictional boarding school, Bullworth Academy. Already on high alert from the previous controversy, and with Rockstar still squarely in their sights, the same groups immediately branded Bully as GTA set in a school with further objections raised from anti-bullying groups. The complaints rolled in before it was released leading to some UK high-street shops refusing to stock the game, more political debate, and Rockstar changing the game’s name to the less provocative “Canis Canem Edit” (Roughly translated to “Dog Eat Dog”) in the PAL regions.

I’d always been curious about it as a game, was it really as controversial as the media made it out to be? Was it still controversial now? Most importantly, is it actually any good as a game? Now, Twelve years later… a couple of weeks ago to be exact…  the PC “Scholarship Edition” of Bully was on sale so I made the impulse decision to regress to my schooldays, virtually don my tie and crested jumper to explore Bullworth in an effort to answer some of these questions.

The player steps into the shoes of the educationally despondent Jimmy Hopkins as he sullenly makes his way to Bullworth academy; shabby, but presumably expensive, private boarding school. Young Jimmy is soon established as schoolboy stereotype #16; anti-authoritarian ruffian from a broken home and a series of expulsions in his wake. The game also quickly establishes that every other stereotypical schoolyard character is represented and if you were hoping for any more than simple one dimensional caricatures of these then look elsewhere because Bullworth Academy’s inmates yield absolutely no depth. The game then proceeds in the typical sandbox style; the map gradually unlocks as the game progresses, tasks are either tangential or advance the plot, there are collectathon elements, a handful of mini-games, and a limited amount of character progression. Young Jimmy’s goal is to win the respect, usually through some show of domination, of all the cliques over the school year and if I’m honest the whole things feels a bit like a warped Harry Potter scenario without the magic.

… before I go any further I have to address one important issue; even for a title made 12 years ago there is a shocking gender imbalance in this game. Regular readers will know that the role of female characters in games is one that I’ve pondered before and Bully is a prime example of female characters being shunted to the sidelines. Each clique has one… and only one… token girl who serves simply as the prize for successful completion of a mission. Jimmy can “make out” with girls (and apparently one boy, but I didn’t discover who that was) in exchange for flowers or chocolates in order to recover health but in no scenarios do the female students take any active role in events. I’ve already mentioned that all the characters are one-dimensional, but the female students are shallow by that standard. Without wanting to spoil, there is one female “outsider” who shows up towards the end of the game who is privileged to participate in a few missions alongside Jimmy and did at least manage to provide a slither of relief in this male dominated experience. I didn’t want this to taint the rest of my thoughts about the game but it is one aspect of Bully that makes it feel dated...

From a purely gameplay standpoint Bully is functional but shallow; as an early(ish) example of this type of open world game the limitations of the time show in the mission sophistication so, whilst there is some variety, most of them reduce down to “go here & collect/do thing” or “go here & fight/talk-to person” occasionally mixed up with a dash of stealthy sneaking. The brawling combat itself is largely button mashing although there are some projectile weapons to keep things interesting. Cycling and skating around Bullworth is fluid and satisfying which is a relief given that so much of the game will see you tearing around between ingame locales. The ability to hitch a Marty McFly style lift on the bumper of passing cars is also a neat touch.

The biggest mini-game variety comes from the lessons… oh yes, unsurprisingly a game set in a school has different classes that Jimmy ‘should’ attend. Taking classes is in the player’s interest as they unlock various abilities as they’re completed and there are a few that are pretty tricky. Music is unsurprisingly a simple rhythm game, Chemistry and Shop feature QTE style challenges, and Gym mixes up wrestling and a neat little dodgeball game. The final four subjects are where things get harder; Art is a remake of the classic arcade game Qix which gets tough; Maths is a sequence of rapid fire number related questions which is a steep ask due to how quickly the player needs to select the correct answer to meet the time limit; English is an anagram game which has a high pass bar and feels out of place given that the rest of the game is about scampering around a town causing mischief; and finally Geography involves matching flags to countries on a map. Call me a massive nerd, but I enjoyed the lessons, I had a sense that the game was yelling “This is a game about school goshdarnit and you’re going to do something at least resembling schoolwork!“; it’s not often you get to switch from egging the girl’s dorm to pondering further anagrams of the letters R O N C Y A.

I guess the big question is does Bully live up to the controversial place that it holds in gaming history and how bad is the content? Some of the biggest complaints at the time came from anti-bullying groups, and the very title “Bully” further clouds the issue. Sure, it is entirely possible to bully other students in the game, and for that reason alone the 15 certificate is entirely justified, but run around punching everyone and Jimmy will quickly end up in big trouble with the authorities (which is no fun) particularly if he picks on little kids, girls, or adults. As a character he’s not too picky about who he helps out and there are certainly as many missions where he’s up to no good as he is helping people in a positive way, but overall the moral tends to be Jimmy standing up for the downtrodden and taking the bullies down… even if that is served with a large helping of “the ends justifies the means“. He’s portrayed as the scrappy underdog who winds up being a reluctant leader and sits cleanly in antihero territory with a smirk on his face thumbing his nose at authority, but he’s not the bullying thug that the media would have you believe was the star of the show. There’s a chance that it’s the supporting cast of cliches that would potentially cause more offence; the spoilt preps, the jocks, greasers, nerds, and townies are all larger than life stereotypes. The teachers are painted in the worst light from an alcoholic English teacher to a lecherous Gym teacher.

The violence is schoolyard brawling and, whilst I don’t want to trivialise, it is portrayed in a mildly slapstick way. The weapons in particular ranging from firecrackers, stink bombs, and itching powder have that comedic edge. I guess the most offensive weapon in the game is a baseball bat but without the inclusion of blood it’s at a violence level well below most animated shows aimed at older teens. Likewise the missions mostly fall in the category of comic-book style hijinks; egging buildings, graffiti, and minor vandalism probably represent the most criminal of activities. Stealing girls’ underwear for the gym teacher (who gets pretty soundly revenged by the end of the game) creeped me out the most to the point of feeling a bit uncomfortable but that’s clearly the intent  of the mission and, although it’s poor taste, I’d hardly say that it’s game-banningly controversial. 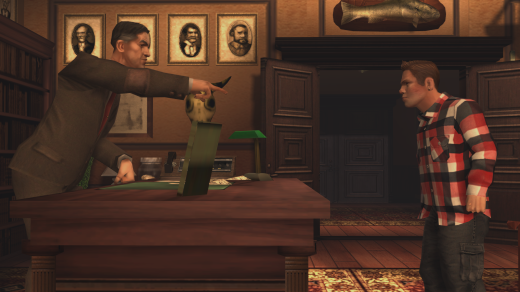 It’s the game equivalent of a silly doodle on the back page of an exercise book; it’ll never win prizes for artistic merit or storytelling, but it’s also unlikely to inspire random acts of violence. It’s not a great game, or a sophisticated game, but I did play it through to the end (despite repeated crashing in Windows 10) and guiltily enjoyed most of it. The comic-book feel has a certain charm and pinning “kick-Me” signs to people, setting off a firework in a corridor, or hurling a stink bomb at a prefect set a certain juvenile grin on my face. Finally it’s all set to a soundtrack that wraps the whole package up neatly to make it feel like an 80’s coming of age movie rather than the brainwashing violence simulator that the politicians of the time would have us believe.

Or maybe I’m wrong? Did you play Bully at release? Any strong thoughts about it?

4 thoughts on “Bully: Bully for You Sir!”