I’ve tried to avoid major plot spoilers, but there’s a chance that there are some minor spoilers lurking in the text below. Also, for completeness, I played the Redux version of the game which has a few gameplay tweaks, slightly enhanced graphics, and loading optimisation.

I’m not sure if subliminally I was inspired by Steam’s latest “event” which is bizarrely focused on getting gamers to acknowledge their growing backlog of… well, whatever has been picked up for a bargain in the past 200 Steam sales yet never played… but I finally decided to fire up “The Vanishing of Ethan Carter”… then some hours later I finished it. The affectionately acronym-ed TVoEC (Pronounced too-voh-eck) jumped out at me x steam sales ago for being a first-person exploration game with some puzzle elements, a supernatural vibe, and seemingly coupled with some healthy reviews & recommendations. The cynical might call it a “walking simulator” leaning heavily on the negative implications of the phrase whilst the more pro-exploration crowd might also refer to it as a “walking simulator” but in a positive light of a group trying to own what was initially a derogatory term. I guess I prefer the more neutral “first-person exploration” as a genre, but given how widely recognised it is as a phrase I don’t flinch at the aforementioned divisive terminology which is a microcosm of the divide that this style of game causes. As I ambled through TVoEC I couldn’t help but begin to see it as a prime example of how and why this genre manages to split gamers.

Players are given the reigns of psychic detective “Paul Prospero” – a man with internal monologue, footstep sounds, but no actual feet as far as I could tell – as he wanders Red Creek Valley. Prospero has been summoned to Red Creek Valley by the writings of Ethan Carter, a young boy with a talent for penning stories, and must piece together the circumstances of his disappearance through exploration and puzzle solving. Rather than any ingame event, the first really curious moment is when the game preemptively flashes up a warning message that this is “a narrative experience that does not hold your hand“. At the time I’d hopefully interpreted this as meaning “Watch Out Players! Tricky Puzzles Ahead!” however looking back it was more likely longhand for “This is an exploration game that isn’t going to spoon-feed you a story, you gotta just go looking for it” and it’s pretty telling that this type of game feels the need to open with a disclaimer in an almost apologetic tone. 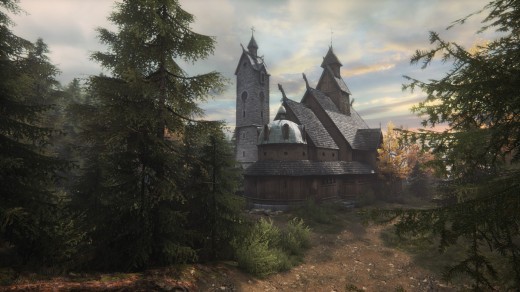 After a brief monologue-ing introduction, I was let loose in the world of Red Creek Valley, and wow; maybe I’ve been playing retro games too much recently, but even considering any skew-factor this is a good looking game. The perpetually setting sun casts rays through the autumn leaves making every moment like a dynamic picture-postcard. The quietly decaying buildings are each presented in a way to the player that any view of them seems to have been purposefully composed, and the whole world seems to exist just as a motionless monument to the designers who crafted it. I wallowed in it; I often seek out games that have this diorama-like quality in their setting and  TVoEC delivers a large helping of exactly that. So whilst I lapped it up, I imagined an alternative version of myself, sitting the other side of this gaming rift wondering exactly what the appeal is, providing the counterpoint that it’s an empty world devoid of life and events. Titles falling in this category often choose to avoid NPC’s and action, allowing the player to simply explore the story through text/memories/items and the obvious question is that, given the versatility of the platform, why isn’t the player experiencing the events firsthand? Why is the player presented with the story in a second hand way? Of course the non-cynical version of me (are you still following?) enjoys this method of storytelling through exploration, piecing together the plot, and gaining insights through fragments but I can understand how a player might be disenchanted by the realisation that this is how the designers have chosen to serve them the narrative.

Moving forward into this world of sun-drenched clearings and shadowy buildings I began to uncover the puzzle elements of the game. Each of these takes place over a specific region in the game world and adopts one of two different forms. In the first type the player must solve, or just explore, a supernatural task to unlock one of Ethan’s stories loosely based on the same theme and generally accompanied by a real world clipping suggesting its inspiration; the subject matter of these jumps around and nicely to break up the wilderness setting. The second type is a detective style piecing together of clues where the player must find, examine, or restore clues in order to begin a reconstruction of a series of events (yes, I know that’s vague, but I don’t want to give too much away). These puzzles have much more of a tangible element of progress as the player directly uncovers a past occurrence and begins to piece together Ethan’s disappearance. 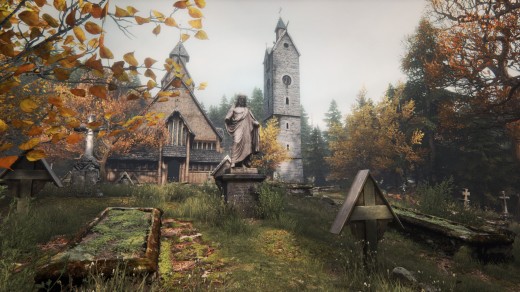 The “story” puzzles once again highlight what might be a fissure in player attitudes. From a “getting to the end” point of view they don’t present the player with obstacles and, whilst my obsessive searching unlocked them all on the first pass, could easily be missed; from a plot exploration point of view however they provide an insight in to the character Ethan without the player having to directly interact with him. There’s no fanfare upon completion, no bonus round, and although it’s not a viewpoint I share, I can understand an apathy toward this sort of progression; after all a puzzle deserves “progress” whether that is in the form of an unlocked region, or a key piece of plot. Tangential exposition of a character is rarely counted in the terms of a progress bar.

Conversely the geographical layout of the game barely requires any exploration. Attractive as it is visually, in a stripped away form it is little more than a linear path punctuated with the key plot puzzles. The illusion of expansive space is shattered with invisible walls and impassible rockfalls which herd the player down the main road. In a literal sense I’d say that I have to disagree with those opening words – this game does hold your hand. It is this geographical restraint that silently guides the player and provides direction to an experience that is otherwise so meandering; in short, players like to keep walking forward. It’s also this linearity that some gamers may find distasteful; in a generation where open-world is so readily available and for a title claiming to be about exploration, the restraint of the player to a single path might feel constrictive rather than guiding.

For anyone who wants a neat review statement, here goes… *ahem*…  “TVoEC is a well-presented first person exploration title with lite puzzle elements and a mysterious narrative“… of course that’s not the whole truth; the “truth” of walking simulators will depend on how you view them. TVoEC is a good example of a walking simulator, the plot is gradually unlocked via exploration, fragments, and puzzles whist the visuals provide an immersive environment framing and guiding the experience. Or, if you sit on the other side of that gaming rift; TVoEC is a joyless, slow paced, linear tour of a lifeless world where the gameplay elements barely have any bearing on the actual experience.

… and you know what? It’s OK that those two viewpoints exist…

3 thoughts on “The Vanishing of Ethan Carter: Love & Hate”