Hello… are you sitting comfortably?…no, come closer… slide your chair in… closer… closer… move in to uncomfortably close territory as though you’re trying to see the flaw in a waxwork. Now start studying my behaviour intensely and try to work out if I’m doing anything devious.. am I?…

Spy Party is a game that has been in development for an extraordinary length of time. I first heard about it in an issue of Games tm (so back when I still bought print magazines) maybe ten or more years ago. Since then I’ve kept an occasional eye on the Spy Party website for development updates, I even bought the game in beta (although didn’t really play it at that point), and finally in recent months it has hit Steam; albeit in early access form. It was the simple, yet instantly understandable, concept that hooked my interest, held it for all those years and is what makes it a very interesting experience now I’ve finally spent some time playing.

One player takes the roll of the Spy who must mingle with AI controlled guests at a suitably swanky reception hosted by the ambassador. The Spy must blend in with the other guests whilst performing a certain number of Spy-like tasks. The Sniper player views the party from the outside, is able to pan around, observe the guest’s behaviour, and try to uncover who the Spy is. The Sniper has a single shot to try and assassinate the Spy; if they succeed, they win, otherwise the Spy wins. Likewise if the timer runs out before the Spy has completed all their tasks, the Sniper wins… and that’s it, a simple Sniper vs. Spy duel which is all about deception and behaviour in a world populated by AI characters.

From a gameplay point of view, there is of course a little more complexity and, as a very asymmetric versus experience, it’s easiest to break things down from each player’s point of view. As the Spy the player’s first challenge is to blend in with the AI. They do typical … erm… Ambassador Reception type stuff; mingle, have conversations, drink cocktails, look at the room’s furnishings, and occasionally just take in the view out of the window. Luckily the player is given some guidance in this respect. The floor is littered with pad markers which indicate places that the AI might stop to do things. For example, conversations have a circular pad; go and stand in it and you’ll join that conversation. Outside of these pads the AI are always walking, so it’s important to move with at least some purpose from area to area selecting a likely stopping point before you leave your current pad. Once stood in a pad, the Spy is given a choice of things actions that they can perform; some are nefarious and some are simply “normal” activities.

For example; one of the first missions learnt is “Swap the Statue”. The Spy needs to walk to one of the small statues (always one of three designs) in the room, pick it up to look at it in a seemingly innocent, yet decidedly overly familiar, way. Then select the swap action whereupon it morphs into one of the other statues… simple right?… except that’s one of the easiest missions to be caught doing. All the Sniper needs to do is pan around the room quickly at the start of the round and make a mental note of which statues are where, then keep an eye on them as party guests inspect them.

The missions sometimes have hard tells, such as the aforementioned statue switcheroo, and sometimes just a behavioural tell for example seducing a specific guest which involves standing next to them a few times and flirting in conversation. Some only involve a single action whereas other require several steps to be carried out, but each has distinct advantages and disadvantages in terms of being discovered. To add to the tension the Spy can always see a red laser sight which represents the centre of the Sniper’s view; cautiously scanning suspicious guests and, whilst it’s a useful tool for picking a moment to sneakily bug the ambassador, it’s also an unnerving, watching, never blinking, soul baring, maddeningly relentless presence in the Spy’s already stressful existence.

All that being said, the Sniper role is no more of a walk in the park. With the clock constantly ticking it’s easy to feel lost and as though the Spy is about to win at any moment. Luckily the Sniper has the ability to highlight (which makes gives them a bright outline), and lowlight (which drops their brightness) any of the party guests; this is an essential tool in keeping track of who is suspicious and who has been eliminated.

For example, in the “contact the double agent” mission, the Spy must be in conversation with the double agent and utter the codeword “Bannanabread”. As the Spy has to be in a conversation circle to do this, the Sniper and immediately (if they’re quick enough) lowlight all guests who are doing other things.

In order to play the game with some degree of success, it’s important to understand the entire ballet being performed; in order to play well takes practice. Luckily the creators have put some serious thought in to indoctrinating new players. The tutorial sets out the basics of the game in an easy to understand way and given the nature of the game it’s also possible to play replays of demonstration Spy runs as the Sniper… even testing yourself against some of the best players without them being present. Moving in to the full multiplayer experience; players are given the choice of a beginner, intermediate, or expert level of complexity. In truth the “expert” setting is just the full game but progressing through the other levels, particularly the beginner, is an important step to learning how the game is played. In the beginner setting only four missions are available and the Spy MUST complete them all. This gives the Spy a very specific focus (as it is easy to be overwhelmed at first), but also severely helps the Sniper who should be looking for the specific tells of these missions. It quite quickly becomes apparent that this greatly advantages the Sniper once everyone involved knows what they’re doing.

Moving through the skill levels adds additional Spy missions and allows the Spy to choose a certain number out of those available. This forces the Sniper to be more aware of what’s happening and not just spend the round with eyes burning the statues. In the expert mode all eight missions are available and the Spy typically has to perform four of these.

Expert is also where things really begin to get interesting. In order to perform some of the actions, the spy must “skill check” with a short QTE (I’m not normally a fan, but it does the trick here). Fail the check (Red) and the Spy will perform the action in a clumsy manner with an overly obvious tell; get a white check and the action is performed normally; manage to hit an elusive green check and the Spy will do the action very subtly or even manage to contract one of the AI to perform it for them. 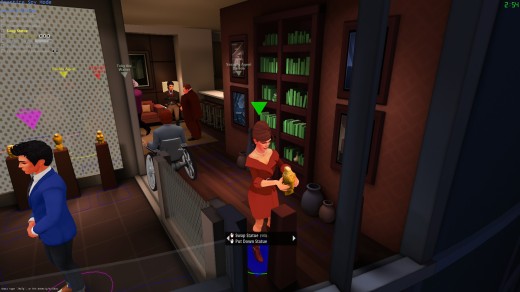 I felt entirely overwhelmed by the expert setting when I first gave it a shot, but luckily Spy Party has one of the best online communities I’ve ever come across in a game. Most players say hi and are friendly and one player would happily talk me through their logic in the replays after a round pointing out how they worked out I was the Spy, or giving me tips on spotting tells as a Sniper. In many ways the game is more intense than any other online game I’ve ever played, but the vibe on the servers is so friendly that any intimidation faded quickly for me and win or lose I always seemed to end up appreciating the round. Small moments make the entire thing worthwhile such as when you notice a character returning to stand next to the same person repeatedly and take the shot because you’ve correctly deduced that they were trying to seduce them, or that first super-smooth bugging of the ambassador as you stroll casually across the room as the Spy. It takes time to learn, but is truly unique if you’re willing to stick with it.

© Luke Carter and Hundstrasse.com, 2015-2023. Unauthorized use and/or duplication of this material without express and written permission from this site’s author and/or owner is strictly prohibited. Excerpts and links may be used, provided that full and clear credit is given to Luke Carter and Hundstrasse.com with appropriate and specific direction to the original content.