Two weeks ago I rambled on about that slightly bizarre outing in Raccoon City “Resident Evil Outbreak“. Aside from the obvious disappointment that ‘Raccoon Hospital’ and ‘Raccoon University’ didn’t feature little fuzzy tailed surgeons and professors respectively, there was also the slight disappointment that I’d ever parted ways with this game and its sibling (File #2) in the first place. Adding to that seller’s remorse were some comments I made the following week as I talked about my rediscovered PS2 collection, and the games that were absent from it that had slipped through my fingers some years before.

I wouldn’t consider myself a collector; my current PC library is pretty much exclusively digital, but in some ways that makes the physical games that I do own fall even more within the bracket of ‘prized possessions’ and there’s clearly a reason that I held on to them over all these years. Like the well-thumbed copy of a favourite novel or a grainy and flickery copy of a film on VHS (What do you mean I don’t actually have any VHS tapes anymore) a physical copy of a game holds not only the game itself but the happy memories associated with it. I’m lucky that I’ve never had to sell any of my favourites, but that doesn’t meant that I haven’t parted company with a few titles over the years, either sacrificing them on the great alter of eBay or discarding them in Electronics Boutique for some pitiful quantity of instore credit.

The games that I have let go over the years are ones that I have either never quite gotten on with, finished and sold because I have no special connection with, or some that I just realised hadn’t been fired up in years. I usually decide to sell them in some effort to settle a guilty conscience about just how much I spend on this gaming hobby although in truth the sale price would rarely cover the cost of a new game so this justification falls squarely in the realm of being a gesture rather than something actually useful.

To tackle this topic once and for all I thought I’d run down five such titles that I foolishly traded/sold/escaped over the years that I regret doing; maybe this will serve as a warning to anyone else out there who feels the need to downsize their collection – just be careful what you’re selling!

I remember picking this up second hand for a bargain price years ago before sampling it and selling it on. It is one of the most bizarre games to exist and is likely to baffle some younger gamers who may not even know that a live action Street Fighter movie exists.

I need to make a slight side note here. The live action Street Fighter Movie was easily one of my favourites around the time I was 11 or 12. I didn’t care that it was a laughable attempt at capturing the game, full of cut fight scenes and terrible acting that was essentially just the van Damme show. This movie was something that was actually aimed at ME, a gamer, and that was special. Looking back on it now it is largely renound for being the great Raul Julia’s final role and he is easily the best thing in it with a gloriously over the top performance as M.Bison; every second he is on screen is captivating. Despite being terminally ill at the time he also did most of the physical fight and wire work and when he was famously asked why he did the film he simply replied that his kids loved the game and he did it for them.

It’s a game based off the movie that was based off the game. It features digitised versions of the characters (similar to Mortal Kombat) which were (mostly) filmed by the actors who had played them in the movie (a notable exception being Raul Julia himself). Just stop and think about how weird this all was; here is a game where you can play as a digital Jean Claude van Damme as he fights Kylie Minogue. I can’t help but wish more game-movies did this, could you imagine a Mario game featuring Bob Hoskins trotting around the Mushroom Kingdom? Of course the game was pretty terrible to play being a poor imitation of the original source material and the home ports falling far short of the arcade version that I remember in the foyer of a local UCI cinema. I guess my enjoyment stretched far enough to see the spectacle before I traded it in, but it was so delightfully weird that I wish I still had my copy today. 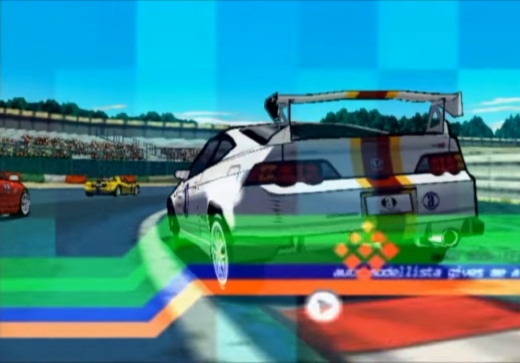 I wouldn’t normally consider myself a racing game person, but Capcom’s hyper stylised cell-shaded rally racer clearly caught my eye. This was the era when cell shading was the hot new visual style and it was certainly very visually striking being complimented by a great soundtrack. The game itself featured a number of tracks, many of which were point-to-point hill races and I guess took more of an arcade/rally approach to the genre similar to title such as Sega Rally.

Adding to the solid gameplay were some neat side features such as being able to furnish and customise your garage. It also featured extensive car customisation including being able to design your own logo and plaster it across your race vehicle; given that this was all then saved to a PS2 memory card, it was quite an impressive feat.. although my artistic talents with a PS2 controller weren’t really up to the task!...

One of the problems with the game was that once you had a fully maxed out Subaru Impreza, winning every race became pretty trivial so I guess I just lost enthusiasm and finally decided that I could put the proceeds towards something else.

Sure, it’s not quite as obscure as some of the other entries on this list, but the original Sniper Elite caught my eye for its uniqueness at the time. It was the only game that I knew of where mission events transpired according to a fixed timeline and required the player to plan accordingly. It also featured unprecedented levels of simulation detail at a time when most shooting games were “put target in crosshair and fire”. Bullet drop, wind, sound distraction, and hand tremor were all influencing factors in each shot and made this a tense game of patience.

I don’t think I really made it through that many missions before a lack of patience turned me away from it, but I think it could have become one of those titles that I chipped away at over time when I was in the right mood… if I hadn’t sold it that is…

I’ve always wanted to be better at 2D fighters than I am. One of the biggest barriers to this was that I didn’t really have any human opponents and facing off against the AI will only ever make you so good. In short I was pretty terrible at Marvel vs. Capcom 2 which probably contributed to me finally selling it on eBay. This is tragic because it was an excellent 2D fighter with a gargantuan roster filled with firm favourites and some more obscure entries sitting either side of that ‘vs.’. I loved Capcom games at the time so the roster on the right-hand-side was filled with some beloved characters each with their own suitably apt moveset; I particularly enjoyed the inclusion of Jill Valentine and Strider. Not only was the roster superb, but the stages, sound, and animation were also some of the best for a 2D game at the time and the whole package is a visual and audio treat being wildly over the top and extravagant.

…it’s also worth noting that this is one of the rarer PS2 titles, fetching a high price at resale… certainly much more than I was ever paid for it….

I couldn’t find an appropriately licensed image, but check out this site if you have no idea what I’m talking about!

The Tomytronic hunks-of-plastic were at their heart part of the family of simple LCD games that saturated the market in the early 90’s. Each was fitted with a plastic neck strap so that you could be truly portable, choosing to pause and jam this lump of tech against your young face whenever the whim took you; it could be one a nature hike or during a shopping trip… or more than likely just at home because these things were far too big and clunky to actually take anywhere.

Despite being simple arcade-style-high-score-focused games, their true magic was the 3D effect. The stark, simple, segmented graphics looked amazing as they were stereoscopically delivered to the player; if you ever see one of these in a car boot sale (Garage sale for our U.S. friends) pick it up and marvel at the retro goodness.

Sky Attack was, as far as I know, not endorsed by Tron, however the tank and ‘arch’ style enemies that you had to blast were so similar that I was convinced it was a movie tie-in. Using the buttons on the upper edges of the system, the player could move the tank side to side and fire at the airborne enemies whilst dodging their incoming attacks. It was a simple concept but worked better than most in that LCD era. Sadly I loaned my beloved Tomytronic to a *cough* “Friend” */cough* who never returned it…

So What about you? Any classics that have slipped through your fingers?