Few people know this, but way back in my mid-teens, I used to be a moderator on a Resident Evil forum (Wow, you’re learning so much about my gaming related past this month!). Looking back I guess it wasn’t for very long; after all there’s only so often that you can speculate on the seedy private life of Brian Irons or endlessly moderate a fanfic thread with the impossible task of keeping it from swerving dramatically out of the community content guidelines…

… never venture on to a Resident Evil fanfic forum….

… only get your Resi-fic from legitimate sources… like me..

Alongside these forums, the site offered a number of fan made guides and walkthroughs to the handful of Resident Evil titles that existed at the time. At some point the ‘top-website-person’ messaged me and asked if I would write a walkthrough for the newly released “Resident Evil Survivor”; a game that I’d picked up close to launch….

He persisted in his request so I finally jotted down a few notes on the various weapons and enemies within the game, but no way was I doing a walkthrough because that would mean I’d have to play the game through again at least once, but more likely several times to hit all the path branches. This wasn’t something I was prepared to embark upon; Survivor is not a good game, but it does fall in to that category of “Games that I really wanted to be good”.

‘Resident Evil Survivor’ for PlayStation (PS1) (AKA “Gun Survivor” in Japan) marks the first in the often overlooked ‘survivor’ sub-series which passed through ‘Survivor 2’ (that took its setting from ‘Code: Veronica’) and ‘Dead Aim’ which was easily the best realisation of the core concept and a title that I have mentioned before when I reminisced about the golden age of console light guns. It’s this core concept that intrigued me so much; a Resident Evil light gun shooter which combines aspects of both genres. Up until this point console light gun shooters (heck, even arcade ones) were largely of the on-rails variety where the player was marched around an environment on a predetermined path taking pot shots at whatever brand of enemy that game seemed to be centred around; think ‘Virtua Cop’, ‘House of the Dead’, or the ‘Time Crisis’ series. ‘Survivor’ took the progressive step to give the player control of where they were exploring in a first-person-walking-around type of a way. At the same time the player could also blast away at the onscreen zombies and assorted Umbrella creations using that hunk of gun shaped plastic; typically in the PS1 era this was the iconic Namco G-Con45.

It was an ambitious concept from the outset; possibly too ambitious for the technology that supported it given that it claims a number of firsts for the Resident Evil family. It is the first to be set in a fully 3D environment (narrowly edging out the release date of Code Veronica), it is the first to use a light gun, and it is the first to use a first person camera view. Given that it was such a departure from the established norms of the series, Survivor was always going to be a gamble for Capcom even if they’d nailed the execution, and sadly the end product fell short of the promised free-roaming light gun adventure in almost every way.

The plot is a bland cookie cutter vehicle that sort of serves to carry the experience along. The player sees the game through the eyes of ‘Vincent’ as he makes his way across an island owned by Umbrella to…

I guess the idea was to wow players so much with the innovative hybrid gameplay that an interesting plot just wasn’t necessary, but this only kind of works if the rest of the game is strong, which it’s not.

The graphics are at best average for a full 3D environment on the PS1; everything has that blocky and trembling feel to it but it’s difficult to criticise given limitations of the time. To offer some slight praise, fans of the series will appreciate the inclusion of a wide selection of classic Resident Evil enemies, but with their models clearly lifted directly from the original games they look especially polygon-ey given the close up first person view. One of the biggest disappointments is the level design; Resident Evil at this time had a proven formula of gradual exploration of a region through obscure puzzles, backtracking, and keys. None of that is present here with the ‘puzzles’ boiling down to “find item”, “use item” rinse and repeat. The path through the game is almost entirely linear which is both frustrating and starkly highlighted given that one of the game’s unique features is the ability to freely navigate in a light gun shooter rather than the traditional ‘on-rails’ approach. The only variety comes in a few branching sections where the player has a choice between which path to take, but the outcome is largely the same and I guess their sole merit would be to add some entirely superfluous replay value. 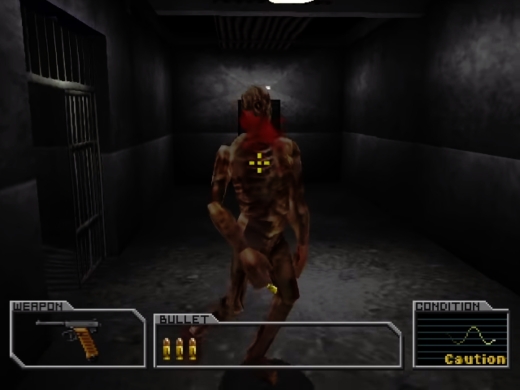 The whole package is jammed together to form a joyless trudge through a weirdly empty world that’s further hampered by a primitive control scheme. For any brave enough to try this with light gun control it is awkward and monumentally primitive given that the gun itself only has three buttons (setting aside start and select): the trigger and the A and B buttons located on either side of the G-Con. Pointing the gun at the screen and pulling the trigger fires, but pulling the trigger when not pointed at the screen causes the protagonist to walk forward with the A & B buttons turning the character. This means that there is no option to back away from approaching enemies other than slowly pivot 180 degrees, walk forward an amount, then slowly pirouette back assuming you haven’t been mauled to death in the process. As a teenager I was particularly hampered because my off-brand Scorpion light gun had both A & B buttons on the same side of the gun (and they were incredibly small) making this exercise unmanageable to the point that I abandoned it… yes, abandoned the main feature that I’d bought the game for! and switched the the controller. This is how I… and North America who were astoundingly given this game without any light gun support… played Resident Evil Survivor; using a joypad controlled cursor to shoot the enemies, and controlling a cursor with a joypad is never fun. 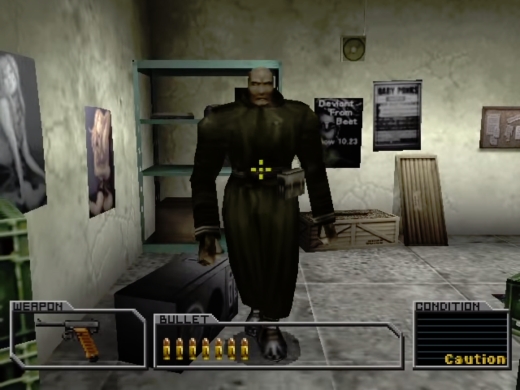 The crazy thing is, I still kind of have a soft spot for the game. I mean, I’m never playing it again! but I have to admire what it tried to do. It tried to put the tension of blasting those Resident Evil zombies literally in to the hands of the player by mashing together two game types that at the time had no right to be mashed together using technology that could barely handle it. It was a spectacular failure, but the designers kept plugging away at the concept and finally by the third iteration of ‘Resident Evil: Dead Aim’, thanks to the help of the superior system and d-pad on the light gun, they actually made it work. Without these types of crazy failed experiments we would never see innovation in game design and Resident Evil Survivor is a part of that failure.

I humbly submit for the consideration of Resident Evil Memories over at ‘That Green Dude’; a fantastic blogger who’s collating Resident Evil blog posts before the release of the resident Evil 2 remake!

… speaking of which, I’m going to be streaming some of the original Resident Evil 2 using my original PS1, controller, copy of the game, and yes, even my original memory card over on Twitch; Thursday 17th January from 7:30 pm UK time. Feel free to join me if you want to hear me ramble on about one of my favourite games whilst playing it. I’ll be keeping an eye on the live chat so say ‘Hi’ if you stop in!