The neon from the Jazz bar’s sign snagged itself on the falling sheets of rain, a red haze draped across the sidewalk engulfing every unaware stranger. Their dark formless shapes illuminated for a second in the shimmering sheet left a momentary after-image of each of those faces on my retinas; happy, lost, cunning, malicious. I pulled my raincoat closer around my neck, but my fur had already wicked the water into my shirt and barely five minutes after leaving the office I was drenched through. The cheap red tie I’d picked up at the five-and-dime would already be bleeding into the white of my shirt… my new shirt… an investment I’d made to gloss over the cracks of public opinion on private investigators. That’s two bucks I’d never see again.

Wardrobe misery aside, I had a job to do. Somewhere in these formless shapes was my mark and I was going to find him. Tonight. I didn’t have much choice, the only reason the super hadn’t already kicked me out and changed the locks was because I didn’t have anything worth selling.

Backbone is a … *Deep Breath* pixel-art-noir-style-detective-adventure-game-set-in-a-dystopian-Vancouver */Deep Breath*… currently in development by small indie team, Eggnut, and it’s also a game that I backed on KickStarter some time ago… 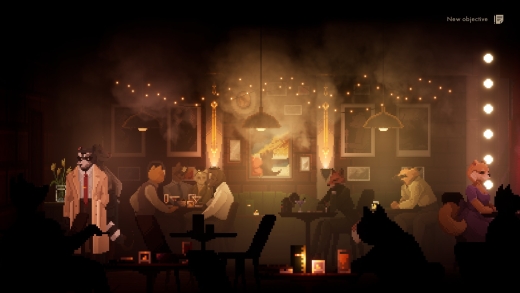 …and long time readers may have picked up on my rocky relationship with both Kickstarter and early access. Whilst the former mainly revolves around the inconsistency of the results, the latter is mostly about me spoiling the final game for myself. Luckily the makers of Backbone have dodged that bullet by releasing a demon in the form of a game prologue…

The prologue let’s players slip in to the cliche raincoat of Howard Lotor, private investigator, and anthropomorphic Raccoon. He’s a noir style detective whose monologue has been transcribed from presumably gravely tones to text boxes. Our protagonist is approached by a client with a case and by the end of  this roughly one hour excursion he’s left with many more questions than he began with. In short the prologue lays out the setting and the initial thread from which this mystery will hopefully be unravelled. The KS pitch promises “No hand holding” and that players will be allowed to follow up on leads as and how they please in order to solve the cases. That’s a bold statement and I’m eager to see how it comes together in the final game and there was at least one moment where I could’ve proceeded in one of two different directions during my prologue playthrough. Any scepticism that’s coming across at this point is because I’ve been burnt before with this type of promise-ridden-opening and it’s hard not to be wary. Games like “Fahrenheit” nailed the opening sense of player freedom only to descend in to near-linearity and finally wind up in all kinds of bit-shat-crazy. “Face Noir” pulled together a worthy atmospheric film noir style point-n-click only to leave the story unresolved and suffer from its own form of “Indigo Prophecy” syndrome, and “The Vanishing of Ethan Carter” pronounced a veto on hand-holding which really meant that the player had to seek out chunks of plot rather than any meaningful branching in gameplay. That being said, I’m quietly hopeful about the direction that Backbone is heading as it has a few interesting features already.

First up the player is a Raccoon.

I get for most people that won’t sell it, but for me I’m hooked already because (let’s face it) those stripy tailed scamps aren’t utilised nearly enough in detective stories. More significantly the prologue hints at a social hierarchy between the different anthropomorphised species which fits with a disjointed dystopian society. Hopefully this angle will be taken in some interesting directions. Adding a further layer to this is the enigmatic inclusion of the “Apes”; hinted to be some greater race still. My own meandering speculation thinks that there is more to these mysterious beings than meets the eye and the optimist in me is pretty sure that this game isn’t going to try and play a “humans are the greatest race” card… it just doesn’t seem feasible when up against a Raccoon Detective.

I’d also be lying if the setting and the presentation didn’t resonate with me. A “retrofuturistic” setting tends to crop up in many of my favourite games from Bioshock to … Resident Evil 2 Noir (yes, I’m sticking with that sentence)… The inclusion of reimagined Vancouver buildings & landmarks is also an aspect I like, despite not being able to remember many distinctive buildings for the few days I spent in the city many years ago. Taking aspects of real cities in to games is something I have enjoyed in the past from the Seattle backdrop of “Deadlight” to the D.C. Wasteland of Fallout 3. Backbone brings this all together in a lovingly delivered pixelart world full of detail; I loved walking down the main ingame street and looking at everything going on, from the posters on the walls to the various lives seen through the upper windows in the buildings. It is a world that’s alive & dynamic, with fluid animation and a real sense of depth (which doesn’t come across in the screenshots) that’s often absent in similar pixelart titles. 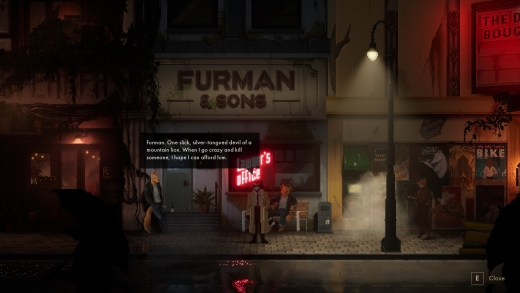 Of course it would be remiss of me to skip out the bits of the experience that didn’t sit so well with me; mainly some of the stealth gameplay…

…Some of my difficulties were due to a bug in the prologue that the developers are aware of and are addressing so I’ll skip over some of this.

The KS page advertises some interesting scent based mechanics that didn’t come in to play in my prologue experience however there were some sneaky-sneaky sections when moving through one of the buildings. 2D stealth that relies on crouching behind the odd table is ‘fine’ as minor gameplay mechanic in an experience that seems to be largely plot and exploration dominated, but the jolting “Game Over Try Again” screen that pops up when Fuzzy Howard is spotted struck me as a little too immersion breaking; hopefully sections like these won’t feature heavily in the final version.

Overall however the Backbone: Prologue is a promising prelude to what will hopefully be an engaging adventure game that seems to be aimed at P’n’C fans. It’s already visually polished and wrapped up with an excellent soundtrack that is simmering with tension just below the surface. The addition of some dark and dangerous plot elements has wet my appetite to explore that rain drenched Vancouver and find out just how deep this all goes.

The prologue is currently available for free on Steam for PC and it looks to be arriving on all major platforms during 2020.