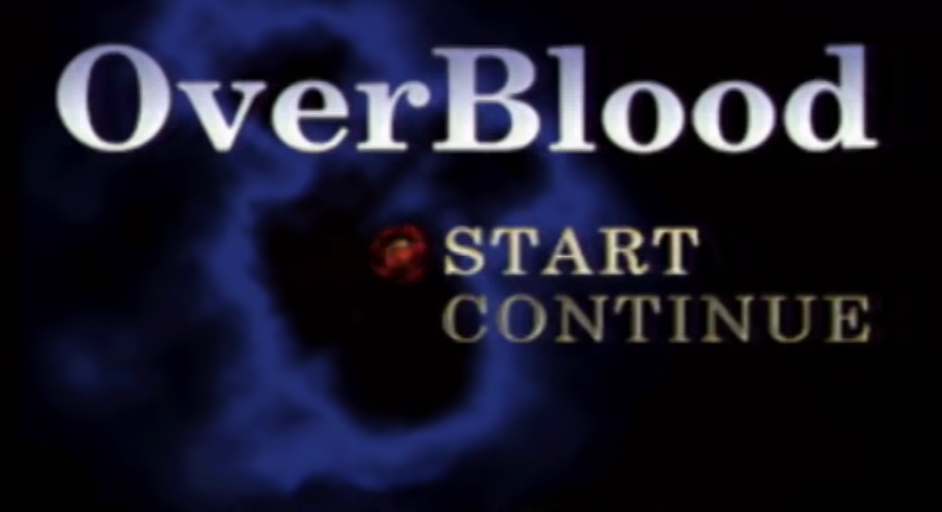 What do you mean you’ve never heard of Riverhillsoft? They’re famous for… erm… porting the original Prince of Persia to the Mega CD.

Overblood. I’m just going to let that hang in the air for a moment.

How or why anyone thought this would be a suitable title for this game… or any game… I’ve no idea. It is literally meaningless, but like the game it game itself, it’s best not to overanalyse.

Overblood (even typing it makes me feel weird) is a game by long forgotten developer Riverhillsoft that, kind of, falls in to the category of early survival horror for the PlayStation 1 as made famous by Capcom. I first heard of the game in my early teens; shortly after first experiencing Resident Evil 2, my uncle mentioned this “‘similar’ game called Overblood where you wake up in a lab, freezing to death”. I think it was this ‘similarity’ that kept the name locked in to my brain for all these years and eventually led me to pick it up on an eBay whim a couple of months ago. A few days later a battered copy of this long forgotten title turned up. An eerie green hued character adorning the box-art, alongisde the title in stark font, and tagline “A 3D Sci-Fi Adventure”. I popped in the disk and was met with a fast-cut intro montage featuring Reboot style animation and a host of sci-fi staples such as warning klaxons, unconvincing monsters, and characters with shocked expressions.

On starting a new game, I was treated to an intro cut scene that showed stuff-going-wrong in a scientific facility before the protagonist wakes up from some kind of Alien-style sleep tube. Sure enough, that conversation with my Uncle all those years ago was right on the money; our… hero?… was indeed slowing dying from hypothermia. Tentatively I searched the room, but the eBay purchase hadn’t included a manual so I mashed the buttons trying to work out what each one did before succumbing to the cold. Game Over. Title Screen. New Game…. Unskippable CutScene… oh yes, it’s one of those sorts of games.

After a few more riveting watches of the opening I managed to engage some kind of auxiliary power supply for heating, activate a little robot helper, and find a shiny metallic gilet to keep warm. 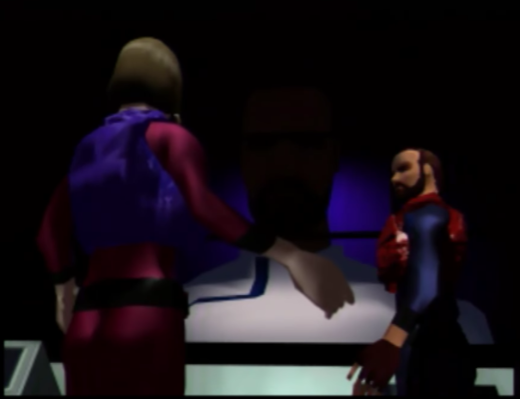 All the best people in this game wear shiny metallic gilets. After all it’s the future. Trust me, in the next decade they are going to be everywhere.

Correctly clad and with robot helper buddy in tow I set off on my mission to escape the facility. Whilst the idea of a fully 3D environment in a PS1 era game might sound impressive, it has that slightly juddery house of cards feel with most of the interiors being bland panelled or concrete empty rooms. When sparse furnishings did appear in rooms I found myself jabbing at every conceivable button to check that it didn’t do anything. I mean, there must be some reason that there is what appears to be an ice cream dispenser and broken refrigerator in this room right? Otherwise the designers wouldn’t have wasted the storage including it. It’s not like they included any other window dressing besides the crates and badly textured vents on the walls. After an hour of making a little progress and working out the quirks of the controls, I decided to call it an evening. Only I had no idea how to save. I tried ‘start’. I tried ‘select’. I tried ‘start & select’ which resets the game. Lost all my progress, grumbled a little, and went to bed. It transpired that I’d missed the a small portable tape recorder in one of the first rooms which allows the player to save.

Slowly I began to make my way through the facility and discover the plot that is brought to life through all the robotic acting and wooden voice work that I would expect from this type of game. Whenever a character talks they stand in a slightly crouched ready pose as though they’re preparing to dash off mid-sentence and they disconcertingly rock back-and-forth as though the animators knew that people don’t stay perfectly still, but couldn’t really work out how to make them idle naturally. This is of course when we’re not treated to equally hilarious pre-rendered cutscenes where the robotic acting factor manages to be ramped-up and everyone is slightly shiny.

Our hero is called Raz. He wakes up to discover that, had it not been for some kind of emergency, the sleep pod was programmed for him to snooze for eternity. Finding himself in some kind of slightly damaged underground facility and, not wanting to wait around and meet his captors, he decides to leave. Oh, he also has no memory of anything before waking up in the pod. As he makes his way through the facility, a green scaly corpse falls put of a doorway at him which Raz correctly hypothesises to have been infected with ‘something’. Moments later he discovers the same ‘something’ to be appearing on his own arm. During a brief scuffle with a living green-scaly man the little robot is destroyed and curiously, as though anticipating some future use for it, Raz picks through the mechanical corpse of his friend to retrieve its memory chip.

Soon after, Raz meets Millie who unconvincingly claims have no memory too. It’s around this time that the player sees mysterious science-man watching the two from a monitor; seemingly hell-bent on rescuing Millie and killing Raz. Helped by Millie’s inexplicable (yet unnoticed by Raz) knowledge of the facility they carry on until Raz finds a report, apparently written by Millie about some kind of virus testing programme to produce super-soliders that they were testing on clones.

Millie denies that she wrote it and Raz buys that for some reason. The pair continue and Raz is suddenly taken over by the virus, turning in to a green-scaly man, but Millie manages to stun him, wrestle him on to some kind of science device, and use it to suck all the virus out of him. Moments after becoming a monster, Raz is fine again. They find a video of science-man telling other science men that he doesn’t care about the danger of the earthquake (the event that woke Raz up to begin with), he’s going to save Millie. The other science-men remind science-man that she’s not his wife and she is only a clone. Whilst watching this Raz tactfully blurts out to Millie that she is a clone. 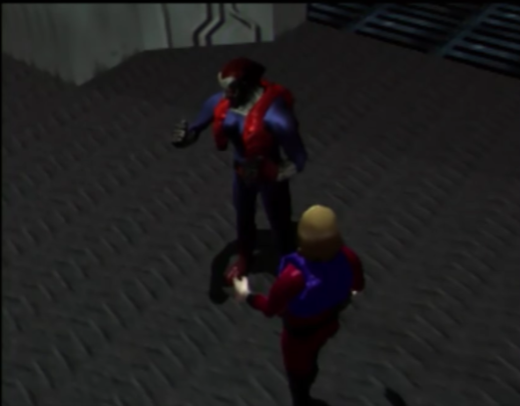 Continuing up through the facility science-man grabs and kidnaps Millie. Raz follows and has to use an ID he found that conveniently matches his face to get through the security door.

Raz walks through a room full of tubes of clones of him.

Finally Raz confronts science-man who steps in to the light and is ACTUALLY Raz. Player Raz discovers that he is a clone. Nobody is surprised.

Science-man threatens to kill Raz and Millie says that, despite having only known him for a few hours and there having been no chemistry (badly acted or otherwise) between them, she loves Raz and not science-man.

Without any warning, science man turns in to a green-scaly monster to conveniently become the final boss. After defeating him Raz uses the memory chip of his robot buddy to unlock the escape elevator and science-man reappears for the player to fight again… identically… for a second time before the game finally runs out of sci-fi nonsense and decides to roll credits.

I’m pretty sure that the writers just put sci-fi staples in to a tombola and started picking them out in a frenzy, blurting out how they could probably be included somehow; and things don’t really become any more coherent from a gameplay point of view. In the interest of fairness I will start with the only positives I can find: Firstly, the player can play from fixed-cam, chase-cam, or first person perspective (which was pretty rare for this period of gaming), and secondly there are moments where the player needs to solve puzzles by switching between the two characters. That’s it.

Tank controls and robotic run animations make you feel like you’re trying to manoeuvre a fridge around the game. The ‘run’ button doubles as the ‘push’ button and, as the characters have novelty oversized hit boxes, clipping a corner and suddenly dropping in to full shoving-a-wall pose happens continuously. Riverhillsoft also seem to be showing off that the characters can ‘crouch’ with every area needing to be searched both standing and squatting to make sure that you don’t miss an item that is cunningly ‘low down’; at one point a critical game item is hidden low-down on a piece of generic scenery. On top of all this there is the usual helping of weirdly specific puzzle game logic and cheap instadeaths; so save often!

… but then it’s also a very empty feeling game. Rooms are big and sparsely furnished, yet it’s somehow ugly at the same time with areas of garish carpet and weird screen flickers as the resolution changes for cutscenes (which incidentally is what stopped me streaming it). There’s no real sense of consistency. Enemies only show up a handful of times yet the player is expected to take on a hefty endgame boss (twice) with minimal experience of ingame combat.

The whole thing feels like a parody of games from that era, as though every trope relating to this type of game had to be included. I half expected to get to the end and find a message from a present day indie-developer telling me that they released this game in 2019 as a deconstruction of the form and had it sold in battered PS1 cases on eBay as an immersive ARG-experience.

… and yet somehow I sort of enjoyed it. How obtuse it is, how cheap the deaths are, and how hilariously cheesy the plot is. I sat laughing out loud at corny dialogue and the moment that I kept failing to jump a gap in a bridge and then found out that I should have been jumping over the wide part of the gap and not the obvious narrow part.

So I’m keeping an eye on eBay again… because Overblood 2 exists, and it comes on double CD…