… the dropship touches down on Mars and you tentatively step out. That murky gantry over some deep chasm your first taste of this isolated research outpost. Up ahead two shady characters mutter and plot; they’re altogether too suspicious. Unbeknown to you the suspicious characters go and talk to an even more suspicious and sinister character whilst you make your way to a suspicious commanding officer and…

Oh heck, everyone you meet in this damn game is suspicious & sinister. Someone desperately needed to tell the writer in Doom 3 that writing tense dialogue doesn’t mean each character tries to out gravely voice the other and that if you make everyone sinister then it kind of loses its impact. Anywho, where was I in the plot synopsis…

You get sent off to investigate some missing workers and then one of the sinister people does a thing that releases… “Doom”… (I guess) which possesses most of the humans in the local area and starts spawning in demons. Sadly for the demons their spawning accuracy is a little off and many end up trapped in a tiny cupboard waiting for some hapless space marine to touch the pressure plate just outside the hidden door and set them free. From this point on you are playing chase the objective, being sent hiking across the Mars facility to meet up/find/stop any combination of some people/evil force/object. It’s one of those games where whenever you get it the place you were trying to get to, you find an empty room, or a dying person, who lets you know that you just missed the person/thing/entity you were looking for and they’re now on their way to some new location about 5 levels away.  Ultimately you go to hell (because it’s a Doom game) and retrieve an object which helps you destroy all the demons.

… and if it sounds like my plot summary is a little thin on details I’d like to remind you that this is supposed to be a Doom game and plot really isn’t the reason that I picked it up; not that anyone told Doom 3 that. If you really want to know what’s happening then you’ll need to sift through the mountains of PDA’s that belonged to the crew reading though emails and listening to audio logs (most of which revolve around ‘strange goings on’ and ‘crew members behaving oddly’) to get hints as to the reasoning behind the path you’re inexorably being sent along. Whilst Doom 3’s plot might not be the reason it has had a mixed reception over the years, the very fact that it has a plot attempting to be more complicated than shoot demons could be indicative of some of the underlying difficulties it faced finding its identity. 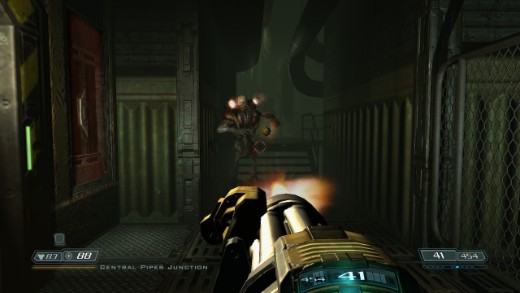 Doom 3 was released in 2004, some 10 years after Doom 2, and wow, how game tech changed in those 10 years; arguably a heck of a lot more noticeably than in the 12 years between Doom 3 and Doom ’16. Doom 3 was the first attempt to re-imagine the fairly crude world carved out by those earlier romps by the primitive Doom engine in to a ‘modern’ FPS experience. I first played it a couple of years after release and despite the mixed reviews seem to remember enjoying it, so when I saw the re-release on sale for the Switch I decided to push on with my recent exploration of Doom and pick it up.

The game opens with a stroll through some of the living spaces of the Mars base; there’s an effort here to world build and give the game more depth than just ‘space facility’. It’s also a chance for the game to show off the graphics which at the time were top notch and required a monster of a PC to fully appreciate. Even going back now (although I appreciate it’s a re-release so may have had a layer of polish applied) the visuals hold up very well considering the age of the game. Pushing past the opening scenes however, I also began to appreciate how the visual prowess of the game had a hand on some of its identity crisis.

Once the demonic forces are released, the game begins proper; the player picks up a shotgun to start applying it liberally to the forces of the damned. The first thing a ‘classic’ Doom connoisseur will notice (looking past the impressive rendering) is that Doom 3 largely takes place in cramped tight corridors with doors approximately every fifteen steps and it barely deviates from this formula for the remainder of the game. On top of this there are rarely more than 3 or 4 enemies onscreen at a time which sets it apart from the original’s wide corridors, interesting open areas, and clusters of monsters scuffling and infighting to take a chunk out of you. Even moments where the player is briefly (very very briefly) on the martian surface feels somehow cramped; that red rock rising sharply from the tight ravines that our weary warrior need to traverse between the various labyrinthine science buildings. I don’t think it’s too much of a stretch to imagine that at least some of this is down to technical limitations with large spaces and enemy numbers posing too much of a challenge for even the beefiest gaming PC back in 2004 when lovingly crafted in Doom 3’s ambitious engine. 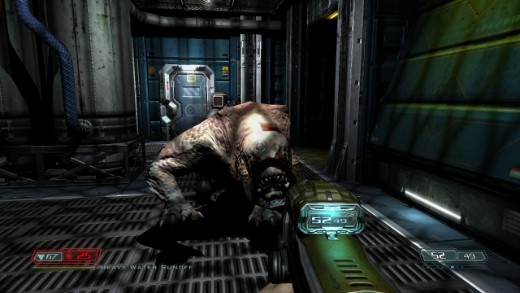 Instead Doom 3 opts to focus in on the horror aspects of the franchise, choosing to have sinister re-imaginings of the classic enemies, a much slower pace, and dark foreboding corridors…

… oh so many dark corridors….

By far the most widespread criticism of Doom 3 is just how dark it is. I pushed up the ingame brightness to maximum and it was still dark. At least 75% of the game is viewed through the small circle illuminated by your flashlight gently mocking the size of my modest widescreen TV. Doom 3 breezes past atmospheric dark segments, through the territory of challenging dark moments, past claustrophobic dark set pieces, all the way to frustratingly awkward darkness. It’s really dark. The original release of the game didn’t even allow you to hold the flashlight and a weapon at the same time (resulting in the notorious duct tape mod). The switch port fixes this, but the flashlight drains uncomfortably quickly and needs to be switched off every 30s to recharge…. which makes no sense contextually… why?… why does it drain so quickly and why does it recharge after a few seconds? Far from adding tension I just stopped walking every so often to wait for the recharge. There is nothing good I can say about this flashlight system. Add this to some enemy types that flit about erratically whilst you try to find them with the light and that send your view spinning as they do damage, and the frustration factor is multiplied.

If the darkness didn’t slow the player enough then the stamina bar certainly will. Even sprinting our ‘new-Doom-Guy’ barely gets past a leisurely saunter for ‘classic-Doom-Guy’ and normal walking is glacier-slow. The whole pace of the game feels like a product of those early 2000’s modern military shooters rather than the loud and brash style of the originals. Tie all this together with largely linear levels and Doom 3 doesn’t really feel like Doom at all. My wife was half-watching me play for some time before she even realised it was a Doom game; she thought it was some gun-filled romp through a haunted insane asylum given the countless audio logs I was sifting though about erratic behaviour all in an effort to try and find the code for those annoying lockers that are everywhere but disappoint when you bother to open them. 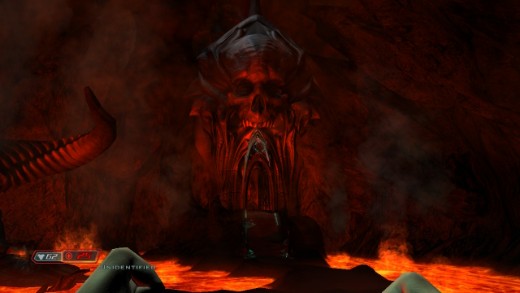 But it would be wrong to say that it’s all bad; setting aside is deviations from the early games, Doom 3 has some redeeming features. It genuinely manages to be creepy and, if you can look past the cliche cheesiness of the plot delivery, it is competent as a sci-fi horror FPS. Assuming you wanted something less cartoonish, the enemy redesign is generally strong with the ‘pinky demon’ being transformed into a hulking beast charging toward you and imps conjuring glowing fireballs to fling in your direction. The player’s quick trip to hell in the second half of the game and subsequent visions of it spilling out in to the real world finally manage to mix up the setting with something visually striking that’s somewhat more illuminated thanks to the pools of lava. Sadly the player only gets this variety having scampered down what feels like the hundredth identical space-facility corridor. Combat feels solid and responsive with classic weapons reappearing in modern form and a few new ones thrown in for good measure.

Unfortunately this just isn’t quite enough to redeem it in my opinion. I swear you could cut a good few hours of gameplay out and not even notice that you hadn’t clomped through the 3rd section of alpha sector or whatever. Doom 3 is a re-imagining that tried to be too similar to its contemporaries rather than understanding why the franchise was popular in the first place. There’s just not enough Doom in it. Where are the puzzle-box levels that I enjoyed so much about the original? or the fast paced combat spaces? or even classic powerups like partial invisibility or the soulsphere  (the light-amplification goggles would have been nice)? Even when there are veins of Doom running through it they somehow aren’t quite right. Berserk mode makes brief appearances, but in strangely laboured set-pieces and the ‘Doom-guy’ (heck, they might have even named him) wears the classic armour, but why no iconic helmet?

Even weirder when you consider the outside sections have an oxygen bar that you can refill with gas cylinders but he is always shown helmet-less. Is he just breathing straight from the tank? 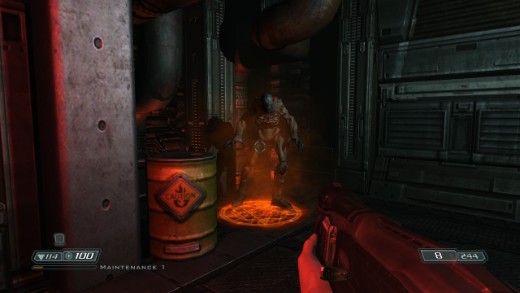 I finally threw in the towel a handful of stages before the final credits (after all I did complete it years ago) feeling a mix of both sadness that I hadn’t made it back to that Cyber Demon, and relief at finally being able to look around without the confines of a flashlight’s beam. If Doom 3 is your thing then I wish you well with it, but I’m not going to be firing it back up again in a hurry…

… of course later this month Doom 64 will be released for Switch, and I’ve never played that. Should I carry on with my classic Doom exploration?