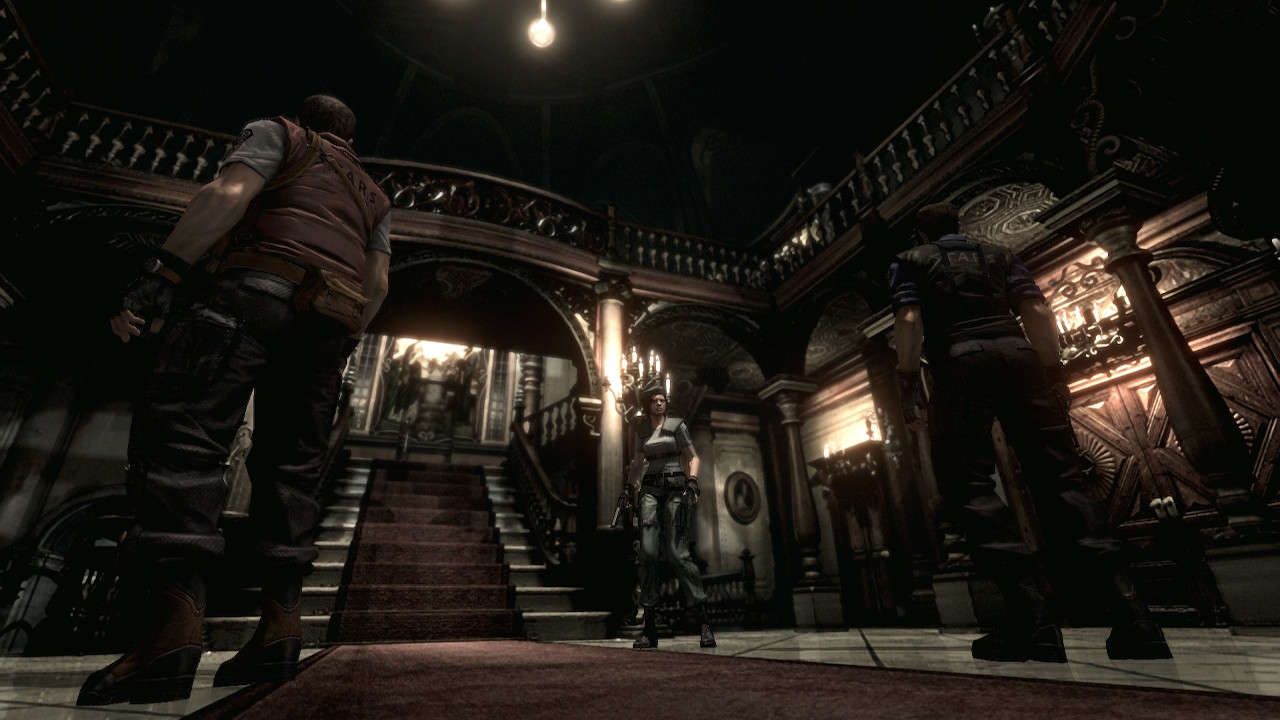 Apologies to all you non-Resident-Evil-Fan-Readers out there, but this is a Resident Evil related post. A little while ago I was once again in a Resi-mood, to I picked the REmake up on the Switch. And yes, it’s a great game and probably one of the best remakes ever cashed-in-in-on by Capcom. So I picked my way through Chris’ and Jill’s scenarios and found myself mulling over the implications of each of these versions of events. More than that, I realised that considering events in the following games, and given the additional questions raised by Resident Evil Zero, It’s Jill’s scenario, and not Chris’, that must be canonical… and that it must’ve been pretty awkward when Chris found out…

“That’s some expensive carpet…” Chris Redfield thought as he tentatively explored the flooring with his socked left foot. He kicked the discarded combat boots to one side and stretched out his body as best he could whilst still technically remaining seated in the cold metal chair. Irons had been gone for hours and his final words before leaving the room had been “…don’t move…” Even so, Chris had just reached a conclusion in his internal debate and decided that boot removal was technically not moving. The Chief seeing his socks was preferable to spending another how-ever-many hours with aching feet. It already felt like a lifetime since the surviving members of S.T.A.R.S. had been manhandled in to separate rooms for a personal debriefing with Irons himself following that nightmare in the Mansion.

Chris looked longingly at the deep red padded leather chair standing on the other side of the Oak desk in front of him. He was pretty sure that Irons’ butt-print was still just about visible, leaned in for a closer look, remembered that there might be cameras watching, and decided that a normal thing to do would be to slowly pretend that he was stretching out his back before letting his eyes take yet another tour of the artwork adorning the walls. Depictions of violent battles captured in oils hung on the murky wooden panelling; the Chief had apparently turned this wing of the Police Station in to his own private art gallery. “At least I know where all the budget went,” Chris muttered before quickly re-sealing his lips as a key rattled in the door and Chief Irons made his appearance. Even without having spent the night fighting monsters and escaping the Spencer estate, the Chief looked exhausted. His brow was glistening and crumpled in to that permanent scowl, shirt sleeves were at his elbows, and the gently smoking cigar in his lips seemed to immediately fill the room with an acrid smoke. Theatrically he lumbered across the room to the empty chair, paused for a moment to brush out the previous butt-print as though dissatisfied with his effort, before sitting down with a light grunt.

Chris managed to stifle an eye-roll, but it came out as a weird grunt coupled with a strange facial expression that seemed to cause the Chief to raise his eyebrows and push back into that soft chair.

“I get it chief,” began Chris, “monsters, zombies, secret lab. It’s crazy, but you’ve spoken to the others they must’ve corroborated all of this. That house was just so… so… dammit, if I was making up some story to cover up a botched mission, or whatever it is you think I’m up to, I would have at least made it half believable!”

The tip of Chief Irons’ cigar glowed a bright red, illuminating the smile that drifted across his face.

“Chris…” the Chief paused, shaking his head slowly, “… Chris…Chris… Chris… you’ve got me all wrong. When four of my S.T.A.R.S. come back and tell me there they’ve spent the night in a mansion full of monsters and traps, then of coouurrrse,” he lingered on the word, almost purring it out, “I believe that. But I’m not interested in which key opened what door, or where you found each crest that opened the garden gate…”

“… secret, grave compartment that had an immaculate Colt Python in it…” interjected Chris. Irons closed his eyes for a second and wiped a few drops of the gathering moisture from his brow before slamming his hand down on the desk.

“I said I don’t care!” he bellowed before readjusting his waistcoat in an effort to gather composure. “I don’t care,” he repeated in a soothing tone, “All I want to know is the answer to one simple question. Where is Chambers?”

“Rebecca?” Chris screwed up his face in to what he thought ‘incredulous’ was, “how should I know what little corner of this station you’ve got her stashed in? As soon as Brad touched down in the roof you had us dragged off in four different directions. Poor Jill has already spent the night holed up in a concrete cell, hell, she’s lucky I stumbled upon it and managed to get her out before that place became an inferno.” Chris’ eyes narrowed, “Is this some kind of sick ploy? Have you done something to Rebecca? That rookie has been though enough tonight, cooped up in that mansion, her team dying around her.”

Irons held up a grimy hand to stop Chris before casually flicking open one of the manilla folders on the desk. Drawing in a deep breath he shuffled slightly in the chair, presumably working on his latest imprint before taking a businesslike tone.

“We recovered a video log from a location near the edge of Raccoon City timestamped several hours before Alpha team touched down. It was a mission report from Miss Chambers,” he gestured to some of the video stills in the folder showing the rookie’s young face, dirty and tired with eyes that spoke of a recent ordeal. “She reported travelling by zombie infested train to an Umbrella facility where she encountered many of the monsters similar to those described in the alpha team reports before finally killing…” Irons paused and lifted a page to read a seemingly inconsequential detail before closing the folder, “… a man made of leeches. Yet in your own report of last night’s shenanigans, you stated categorically that when you met Chambers she had been ‘hiding from the monsters’, was ‘clearly scared despite putting on a brave face’, and ‘didn’t know what was going on’. Are you sticking with that assessment Chris? “

Chris wished that he’d kept his boots on, somehow his defences felt weakened without them. He curled his toes in to the carpet. “It’s what happened…”

“… and she didn’t mention that she fought through a similar nightmare just a few hours before, single-handedly killing scores of these creatures?”

“Or the man made of leeches perhaps? Maybe he came up in idle conversation?”

“Or how about that she knew the entire thing was linked to Umbrella Chris?” Irons leaned forward and dropped his voice to threatening rumble, “How about that Chris? Did she mention that minor detail?”

Chris looked at his socks and Irons sat back in the chair, resuming his normal genteel tone.

“From the top if you please.”

With a resigned look on his face Chris tilted his head back and began to recount the events again.

“We spotted the bravo chopper from the air. Smoke pumping out of it. Heck, deep down we all thought we were going to check out a crash site. Brad put us down in a clearing close by and we headed out on foot to check the area. I wish I’d taken the damn keys off him,” Chris said shaking his head, whilst the smirk on Irons’ face grew a bit wider at the mention of Vickers’ fateful involvement in the night’s events, “anyway, Joseph pulls this gun out of the grass with a severed hand still holding it. I mean, shit, the finger was still on the trigger. Then out of nowhere this dog knocks him to the ground and just starts tearing him to pieces. Within a few seconds it’s joined by more, two, maybe three. All of them just, wrong, skin hanging off.”

Chris paused for a moment at the thought, but the Chief flicked his cigar impatiently and gestured for Chris to carry on.

“So they see us and we run. Back to the chopper, only that idiot Vickers is already in the air, tail between his legs, so we keep running, just … running, through the forest. And then, buried somewhere in that wilderness we see the mansion so we head straight for the front door and just pray that it’s unlocked. Three of us made it inside, someone locked the door and we stand there for a minute just trying to make sense of it.”

Irons leaned in and sucked deeply on the cigar before forming his next smoke infused sentence.

“And what did Barry make of the situation?”

“Barry? I… I told you, only the three of us made it to the house; Jill, Wesker, and me. Barry, he… he didn’t make it. Last I saw he was was flagging, the dogs were gaining and that damn hand cannon of his didn’t seem to be reducing their numbers.”

“You see Chris, this is where your story starts to fall down, and I’m not the only one who thinks so,” said Irons with an air of mock innocence, “Barry also disagrees with your version of events.”

“Barry? You mean he’s alive? Well, what happened? How did he escape? did you pick him up in the mountains?

Irons slammed a fist on the desk.

“We picked him up with you Chris,” he yelled. Any pretence of patience now lying in ruins along with the manilla folders and an overturned ashtray on the floor, “He was sitting opposite you in the helicopter. It’s a small police transport helicopter Chris, and Barry isn’t exactly a slight gentleman, I’m damn well sure that you would have noticed him.”

Chris had the look of someone trying to remember if they’d not noticed a large bearded man sitting opposite them in a helicopter.

“… but… Rebecca was sleeping on the…”

Irons ratcheted up to the next level of anger and kicked the chair backwards into the wall as he leapt to his feet.

“Rebecca Chambers is still missing! We have a recording of her only hours before you supposedly found her in that mansion, telling us in her own words that she had travelled on a train and ended up in an Umbrella facility miles from the forest, just outside the city limits. How, or why for that matter, do you think she returned to a forest that she knew was infested with monsters, only to go and cower in the corner of some dilapidated house. And you,” Irons straightened himself up and stepped towards the door, “you let yourself get suckerpunched by Wesker and dumped in that cell for the night. I wish Jill had left your ass where she found it rather than dragging you back here for all the trouble you’re causing me.”

Chris stared, stunned and sweating, his reality pitching and rolling around him.

“Just wait there Redfield. I’m going to find some Bourbon and when I come back you’re going to tell me a different story”

The door closed firmly, the lock clicked, and Chris was alone.