Valve’s: The Lab is still my go to VR demo for anyone wanting to give that ol’ headset their first go. Taking a playful sandbox approach to VR-ing it introduces new users to the concepts of VR in a polished and intuitive way; warp movement, picking things up, firing a bow and arrow – yes, all the core part of VR are there!

My favourite part of ‘The Lab’ however is still the Portal themed robot maintenance bay; a short linear demo with very few interactive elements that astounds me every time I give it a shot. It’s the virtual transportation in to the world of Portal that blows me away. Coming face to face with the beautifully intricate Atlas or that moment when GlaDOS drops in to view – the immersion and the sense of scale are awesome, and for a fan of the source material it gives me chills every time. It’s the same reason that for a long time my Steam VR home was the Team Fortress 2 theme, the chance to be beamed directly in to your favourite game universe is too much to pass up. END_OF_DOCUMENT_TOKEN_TO_BE_REPLACED 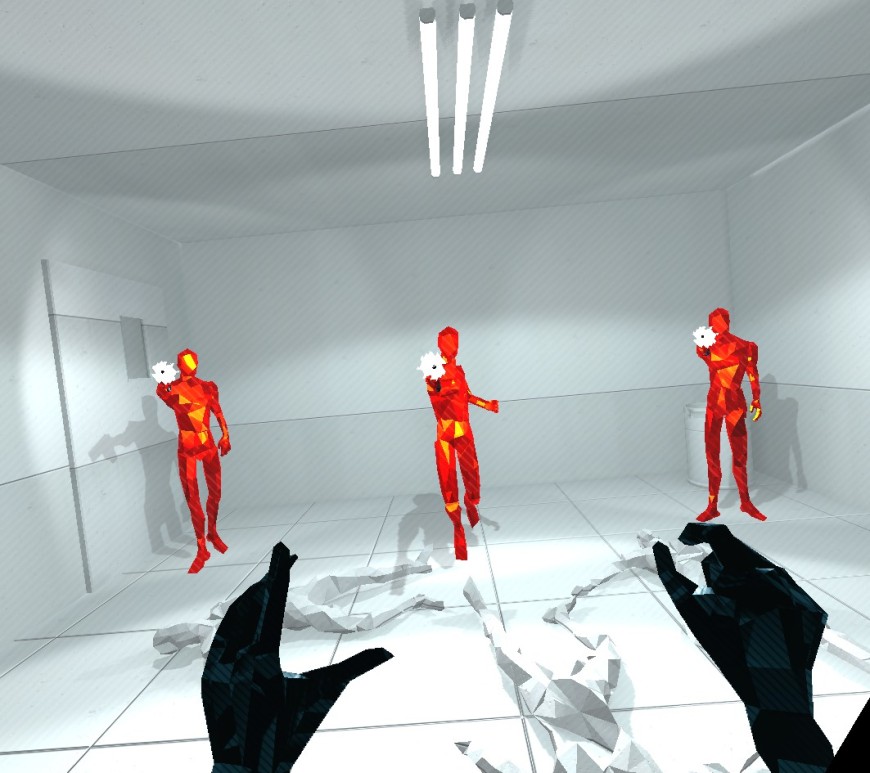 … you’re frozen to the spot…

A bullet hovers, stationary, abruptly halted along that incomplete vector from barrel to your face. It’s barely a foot from its intended destination. Without moving your head you allow your knees to bend. The very act of crouching seems to gently turn the crank on the passage of time and the bullet slowly proceeds forward. You continue to crouch, but can’t resist letting your eyes follow the projectile as it sails over your head. This is a game played out long-form over fractions of seconds.

Super Hot is a game that’s been on my radar for a long time; novel time disrupting mechanics often interest me and the concept of Super Hot, an FPS where time only moves when you do, was a serenade to that bit of my brain. Unfortunately I’ve also got a superficial part to my personality and I’m entirely guilty in this case of judging a book my its cover; in short, that angular stark red on white aesthetic turned me off the whole idea of even trying the game. It’s just not something I found appealing and each time I browsed the store page I couldn’t ever quite get past the initial nose-screwing-up to hit the buy button.

My evenings recently however have involved much furniture shuffling as I’ve had a spree of VR gaming. During various internet delvings to find out which VR title I should jump in to next, I consistently saw high praise for the VR version of Super Hot, so I took a deep breath and set aside my visual preferences to give it a shot. END_OF_DOCUMENT_TOKEN_TO_BE_REPLACED 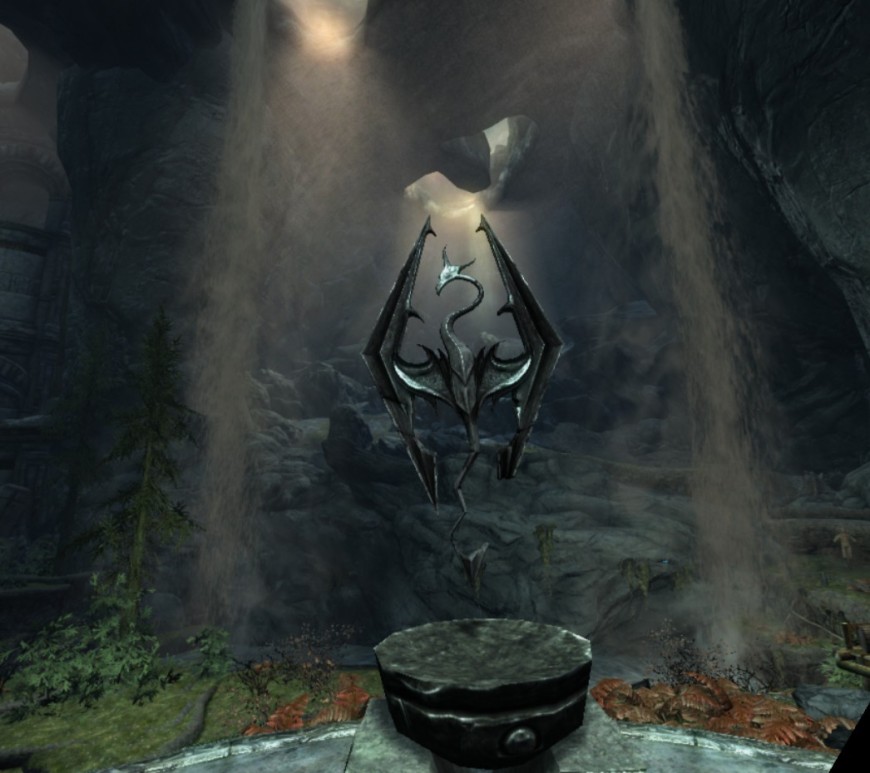 I’d never played Skyrim. Kind of a unique confession for a gamer given how many different systems and versions this game has seen and also how many friends rate the experience so highly. I guess I’ve just never been drawn to that traditional fantasy setting preferring instead the post-apocalyptic Bethesda romps. At the same time I’ve also been caught in a bit of a VR conundrum recently; the Vive is pretty excellent, but in truth there just aren’t that many “full length” titles available. Sure, some of this is due to practicality; my back aches from standing in the virtual world for more than a few hours and having a special VR hat strapped to your face for that length of time can get hot and uncomfortable. None of that seems to be putting me off however and I’ve been keeping a look out for the more substantial VR offerings to feel that sense of immersion in a more expansive world.

Bethesda are one of the few bigger publishers who have embraced this technology releasing both Skyrim VR and Fallout 4 VR; both virtual re-jiggings of the entire 2D experience. I guess that Fallout 4 was the more obvious choice to satisfy this hankering, but I just couldn’t bring myself to fork out more money (even with a heavy sale discount) for that joyless wasteland romp; it didn’t captivate me in 2D and I doubted that VR would change that.

Instead I opted to pick up Skyrim VR; almost everyone raves about Skyrim so this open world classic in VR was surely a winner and gave me the opportunity to try something new despite being a little far removed from the type of setting I’d normally pick so I jumped in. END_OF_DOCUMENT_TOKEN_TO_BE_REPLACED

I’ve spent the past few months in and out of VR, waving my hands around in the hastily cleared space of our lounge with the Vive on my head, shooting zombies, carrying out spy missions, or pulling a good old fashioned bank heist. Before I was gifted a Vive however, my VR experience was limited to a handful of hours using PSVR’s belonging to a couple of close friends. One of the first of these was playing a demo of “Until Dawn: Rush of Blood”; if you’re not familiar it is an almost literal “rail shooter” with the player being placed in the seat of a demonic ghost train and wheeled around in VR, guns in hands, blasting murderous clowns (iirc). The experience was suitably impressive in terms of immersion for one of first times I’d donned a VR hat and worked as a concept, but one of the things that really stuck in my mind about it was that I had a virtual ingame body. Sure, it was just a static model sat in the seat of the ghost train that you sort of had to awkwardly align yourself to, but once I had that figured out, being able to see a virtual body with outstretched arms holding the guns really added to the sense of immersion. END_OF_DOCUMENT_TOKEN_TO_BE_REPLACED 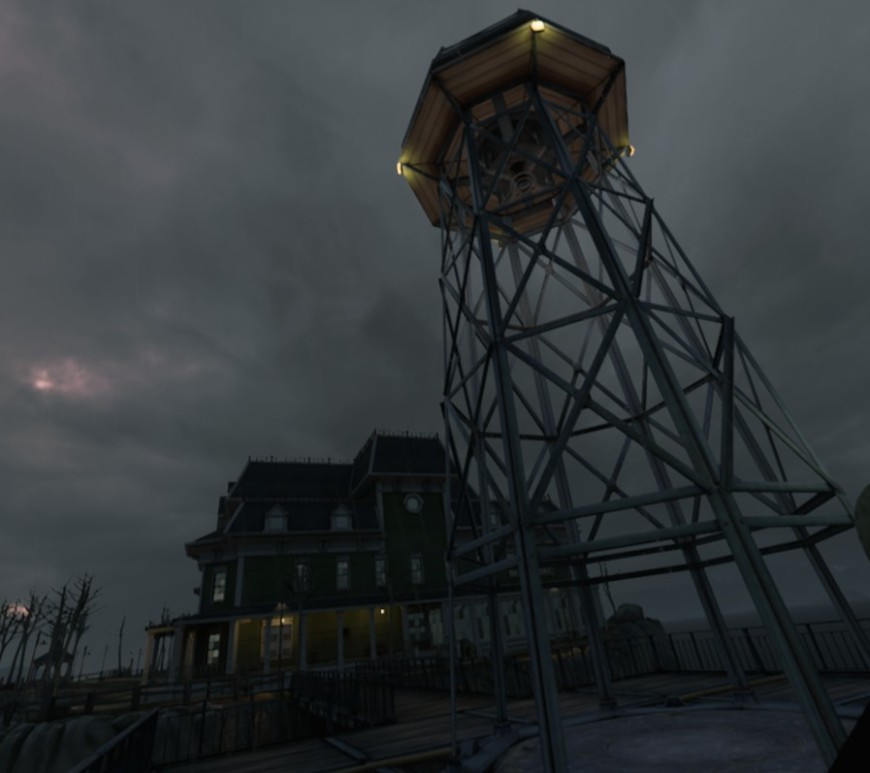 Mr. Swan carefully replaces his broom next to the kitchen window and slowly edges back toward the table. He gingerly picks up the porcelain cat and works his fingers around it to make sure that it is the item he was searching for. Satisfied, he fumbles his way in to the dining room before positioning the cat on the polished oak table and making his way toward the hall. Little does he know that his day is about to take a downward turn.

I sat on the floor and watched Mr. Swan do this several times. The porcelain cat must be the key to it all otherwise why would he have been so careful to move it? The positioning was too precise yet random, the item too intriguing with the dragon motif on the base, and the eyes of the cat too searching, too intelligent, their glazed stare had witnessed too much. Of course ultimately it was just a porcelain cat, one detail in this play that had a surprisingly insignificant role in the a larger sequence of events where everything felt deliberate.

‘The Invisible Hours’ is a VR experience from Tequila Works (although it is now playable in non-VR) that truly deserves the ambiguous qualifier of being an ‘experience’. I’ve mentioned in the past that one of my worries for VR gaming is that it will become the home of ‘experiences’ rather than actual games however in this case the qualifier is justified as there is no traditional gameplay to speak of however please don’t let that put you off one of the more unique and satisfying VR titles that I’ve picked up so far in my Vive adventures. END_OF_DOCUMENT_TOKEN_TO_BE_REPLACED 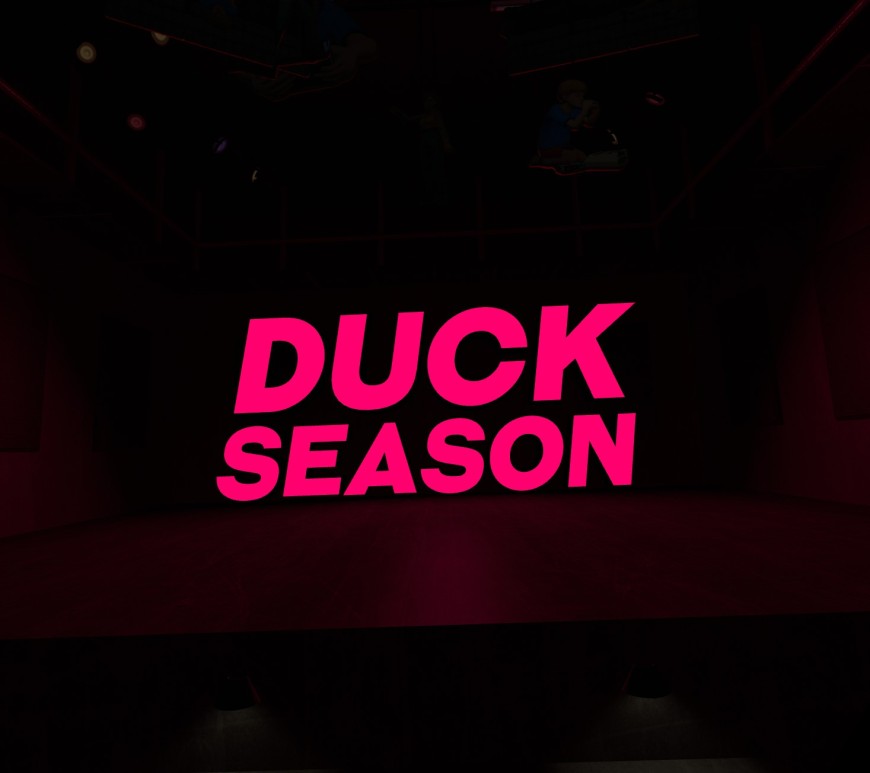 I’d lay a guinea to the fact that most of you reading this are of that very specific age to have grown up knowing the simple time pressure of renting a videogame from Blockbuster. Three-day rental, five-day rental, it made little difference, there was always a race against time. How far could you get before the return day approached? I can’t say that I had that many of the pre-requisite entirely free weekends which coincided with a Friday night adventure through the fabled door below the ripped ticket stub in to the land of blue, yellow, overpriced snacks, and disappoint of realising that although they had about a hundred of the empty cover boxes of the latest movie you needed to find one of the generic boxes to actually rent that movie. Game rental for me was indeed a rare treat, so much so that I can remember almost every instance of it during the 16-bit era… and they were all mediocre titles at best. END_OF_DOCUMENT_TOKEN_TO_BE_REPLACED

The opening title sequence of a game is rarely something mentioned in a “review” (if that is what I do here…) but in the case of “I Expect you to Die”, the opening titles are a notable VR experience in themselves. The player is a passenger through a Bond inspired, highly stylised, red & black dichromatic intro sequence complete with Shirley Bassey style theme music. It’s an homage to everything that the game strives to be – an over the top Spy experience paying tribute to Connery and Moore whilst keeping its tongue firmly in cheek.  END_OF_DOCUMENT_TOKEN_TO_BE_REPLACED 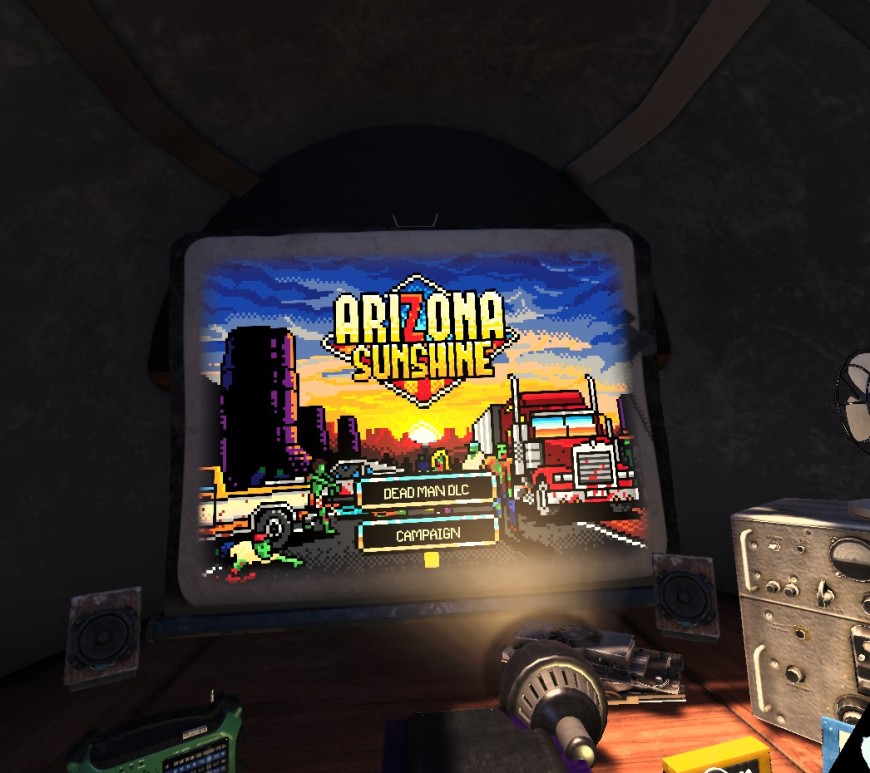 Shooting zombies; it’s what gamers have been doing since the 90’s. Wave after wave they arrive to be met by the ingame blast of a shotgun or grenade, and likewise the zombie shooter genre itself feels as though it’s been delivering a relentless onslaught of titles for the past 20 years. Even if you’re not a fan, it’s difficult to deny that this subgenre has been a successful formula; ever mutating to match the style of the time, but always dropping the player in that futile struggle against the undead. Whether highlighting the harrowing reality of the scenario, taking a darkly comedic look at the crisis, or simply focusing on guilt-free carnage, gamers still seem to find this well-worn path appealing.

One of the first games I looked for when road testing my Vive was a zombie shooter. A short VR experience about two years ago had been with a rail shooter and I was impressed then with how effectively the motion tracking managed to sustain the illusion of wielding weapons.

Enter “Arizona Sunshine” which seems to be the leading VR zombie shooter on the Steam Store and (for those of you who can’t be bothered to read to the end) it delivers a competent VR FPS zombie shooting experience… which might not sound like wildly extravagant praise, but is a pretty good achievement nonetheless. END_OF_DOCUMENT_TOKEN_TO_BE_REPLACED